Young guns asked if they could compete with Woods in his prime - DJ: 'Yeah, I'd take him'

With Tiger Woods returning to action this week, the field were asked how they would fare against Woods at his best. 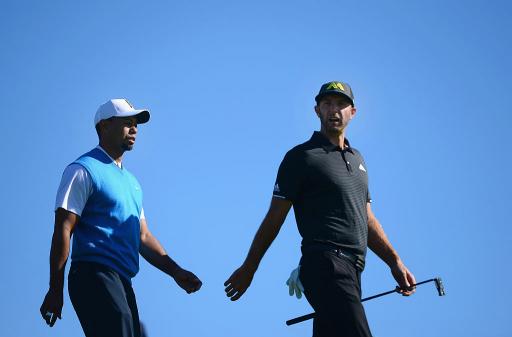 With Tiger Woods making his first start of 2018 at Torrey Pines tomorrow, Tiger mania is under way, with almost every player in the field being asked to comment on the 14-time major champion.

WATCH: WOODS SWING FROM EVERY ANGLE

One line of questioning to the field has been how the players would fare against Woods in his prime, which elicited some interesting answers...

"If I'm playing my best? Yeah, I'd take him. But over the course of a season? For nine years, 10 years in a row? He kept that level up for 10 years. That's very, very sick. My best versus his best, I think it's going to be neck and neck. But he was playing at his best for 10 years."

“To be honest, I think a lot of us dreamt about having the opportunity to maybe walk the back nine with Tiger in contention and have a battle hand in hand.

“It would be something amazing for any of us. I hope it happens for somebody. I hope I'm the one, and quite truly I hope I come out on top if it happens.”

"You get out here and you get caught up in the world ranking, what you're doing compared with those around you," Spieth said. "It's not until you look at data, or statistics, where I've started to see, `Wow, that was absolutely incredible.' The win percentage is the most amazing stat of his career."

"You'd be stupid to say you couldn't. You'd be doubting yourself. I watched it growing up. I knew exactly how good he was. I wish I could have played against him. I think it would be cool to compare yourself to it."

"Truth be told, I'd love to have these young guys that are dominating the game have a piece - just one year - of what we experienced."

"I've played with Tiger when he was playing the best he's ever played, and it was a real treat to see it - although it wasn't a treat to be humiliated by his dominance.

“I've also played with some of these younger guys. They're special players. I would love for the game to give us Tiger getting back to where he was so we could see what he would do against Justin Thomas, Dustin Johnson, Jordan Spieth and Rory McIlroy.