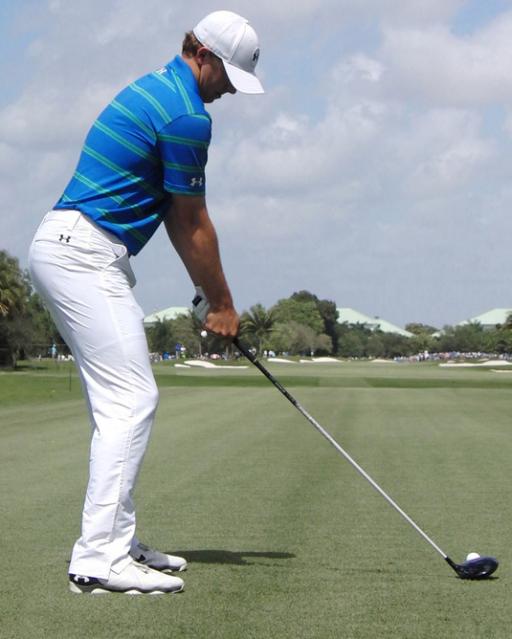 1. He’s very unorthodox from this angle down the line. The shoulders are set a little open which will help the ability to rotate. He’s an advocate of rotation and from the other angle he has a weak left hand grip (turned to the left), which he and Australian coach Cameron McCormick have been very keen to promote as it allows him to hit a fade with a higher, softer ball flight. His natural shot off the tee is a draw. It's a perfect combination for Augusta.

2. This is very much a one-piece takeaway. There are no hands involved, unlike a lot of amateurs who will roll the club inside which means you’re playing catch-up and necessitates perfect timing.

3. The club is working up his right forearm, which is ideal, and the whole club is in line with the golf ball. Amateurs would often be parallel to the ground with the clubhead behind them, stuck on the inside.

4. The club is pointing directly at the ball. One of Jordan's keys is he doesn’t like to feel like he sways, he likes to feel "stacked" at the top (weight centred more over the ball) which is something they work on a lot.

Interestingly, for most amateurs I would encourage them to feel like they are swaying to the right and left to help with weight transfer. If you start with too much weight on the left side, it will create a steep position at the top of the back swing.

Bear in mind, Spieth is a Ferrari and most amateurs are 1971 minis. No offence, but you need to appreciate what you can do and make good decisions to take the pressure off.

5. Down the line it’s a great position and the club is beautifully on line. If you were looking face-on, he has a pronounced bent left arm which is unusual, like Curtis Strange and Lee Westwood - both phenomenal tee-to-green players.

One of the advantages of this is that it decreases tension and helps rhythm. A tense arm also reduces swing speed.

It’s unorthodox, but hugely helpful and brings us onto another another area of his game. Spieth looks at the hole when putting which can only reduce tension levels as he’s not thinking of technique. It doesn’t matter what age you are, but not being bothered about what others think says everything. In terms of mentality, he’s as good as Tiger Woods.

6. Starting the downswing he has a key move as he drives forward, and he has a massive rotation of hips and lower body. The advantage is it takes the hands out of the equation so the club becomes much more stable, and under pressure he is in a good place. If you don’t move forward and open up, you’ll be "handsy" and while it could work, it won’t be consistent.

7. Here he is flush, with the shaft pointing at the ball. He’s on plane and in a great position. Obviously, you can see the left hip moving out the way and if you were face-on you’d see the weight shifting heavily to the left.

8. His hips are almost pointing at the target, like David Duval. His right heel is slightly up as he thrusts through the ball, which again is slightly unorthodox. The hips are the important element.

9. The club is pointing at the tee peg.  Something they work on is not to roll the forearms, to hold off rotation,  as this helps him control the club. This is similar to Jim Furyk’s position – his clubface looks open at contact and it allows him to be very consistent. Interestingly, you would probably not ask amateurs to do this, as you want them to open and close the clubface. Most take it back closed and open on the way through.

10. The body is pointing well left and his hips are also left of the target - he's completed the move and it was fully committed. This was evident at Augusta as he was never looking to guide it off the tee, despite boasting a four-shot lead going into the final round.

Spieth gets huge input from his caddie Michael Greller, a former sixth-grade maths and science teacher, who is giving him clear information. Of course, this is unlike most amateurs who have to play a duel role on the golf course, as player and "personality manager".

Greller first worked with Jordan at the 2011 US Junior Amateur before leaving teaching to take the bag full time in 2013. He is methodical, and very into assessing data - he’s the Tiger Woods of caddies.

Greller calls himself a “personality manager” and as a former teacher he understands he has to make it fun to engage Spieth to get the best out of him. For his troubles he has earned himself about £375,000 in the last month.

But Spieth's personality is key. His family and autistic sister are a big influence on how he handles his situations, and it leads to him being a very calm individual – you can’t teach someone that.

In terms of his swing, it proves anything works as long as you understand your moves and priorities. There is no perfect swing and it is heavily related to your body and mentality. You can counterbalance anything.