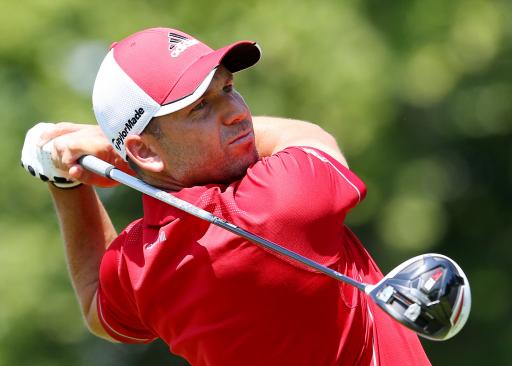 Sergio Garcia is known as one of the world's best ball-strikers despite a less than conventional backswing, says PGA coach Dan Whittaker.

1. Here we see a very athletic set up position from Sergio - he has his spine less tilted forward at address and therefore he compensates for this with more knee flex.

2. Sergio takes the club back very much in one piece as the shoulders are starting to rotate and the hands have done nothing to influence the movement of the golf club. The only downside is that his hips have not begun to rotate at all yet.

3. Sergio is now starting to take the club upwards but is doing so in a slightly unconventional way as he isn’t setting the club with the wrists as most would be starting to and this adds to the downcock we see later in the swing. He still hasn’t moved is hips much in terms of rotation and this would be something that I would encourage most golfers to avoid.

4. The reason that Sergio can get away with not turning his hips as much as would be textbook at this moment is due to the fact that he has kept his arms in front of his body, therefore limiting the chances of them getting trapped later in the swing.

5. The image of the left arm on the shoulder plane is one that I would encourage all golfers to try to copy as it is text book. He still has not fully set the club, meaning the angle between the left arm and the shaft is not at 90 degrees. This can lead to timing issues in terms of setting the club in the transition and the downswing but is a huge source of power as the angle changes dramatically and at speed, creating a lot of lag.

6. In this image the club is starting to set but due to the nature and lateness of the set the club is laying off. You can begin to see the power that Sergio is building up in his lower half as he is starting to begin the movement back to the ball.

7. We can see how the weight is shifting and how Sergio is using the floor to harness his power with the squatting action in his legs. The late setting of the club in the backswing can be seen in this image as the club is very shallow and the distance between his hands and the clubhead is very big. The shoulders are still closed to the target which could trap the arms behind the body in a lot of amateurs yet is a very powerful position.

8. The hips are already opening a lot relative to the target line yet the legs are using the floor for energy with a lot of stored power. His arms are in front of him here, shown by the triangle of daylight between his arms; this daylight is what allows Sergio to attack with a very shallow shaft as space has been created. The arms have moved a long way forward since the previous image due to the shoulders unwinding and clearing.

9. This is a sensational position as Sergio always returns his hands back to a low impact position and one that is very closely matched to his address. This is something that allows him to stay in his posture at impact as the body is clearing and opening very quickly. The shoulders have almost caught up with the hips in this image as the whole body is opening. We can see that the clubface is very stable and square and no excess hand movement and manipulation has been used to square the club.

10. Sergio has allowed the club to fully release and free wheel around his hips, and his shoulders are both still opening as the body continues its rotation. The club has exited his body below the shoulders; this is an indication of him staying in his posture whilst the club works around. This is controlled via the pivoting motion of his body.

11. Sergio has free-wheeled the club to the finish with no holding on to any angles. He is in perfect balance with his weight in the left heel at the end of the follow through meaning the body has rotated fully through. The hips and shoulders are a long way left of the target, showing how far they have rotated through the shot.