It may seem an impossible task but playing an 8-iron from a bunker like a sand wedge is manageable. PGA professional Simon Garner shows us this great drill 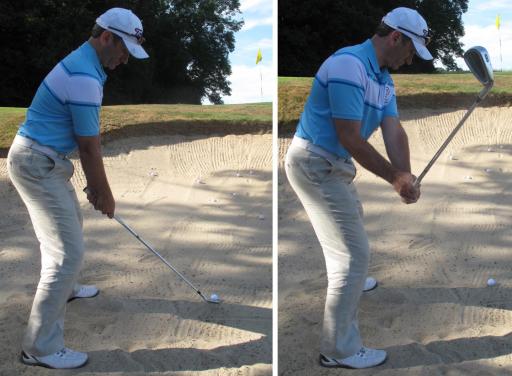 Hitting any bunker shot can be a scary experience whatever lie or position in the bunker you are so why try and use an 8-iron for a greenside escape?

PGA coach Simon Garner lets us in on this challenging but effective drill that helps you hinge your wrists during a high lofted sand shot and explains the 8-iron bunker shot in a brief video.

Grab an 8-iron and set up the clubface and ball as uncomfortably forward in your stance as you can on a flat bunker lie. What you're trying to do is get the clubface as open as possible to give it the same loft as a sand wedge or 60 degree.

The aim for the shot, like many of Simon's other drills, is to train yourself to adapt to any situation no matter what club or stance you have. It's a drill to give you the confidence to hit any tricky shot and it's great fun.

Click the next slide to see how Simon hinges his wrists during impact...