How Sergio Garcia plays bunkers - by his dad 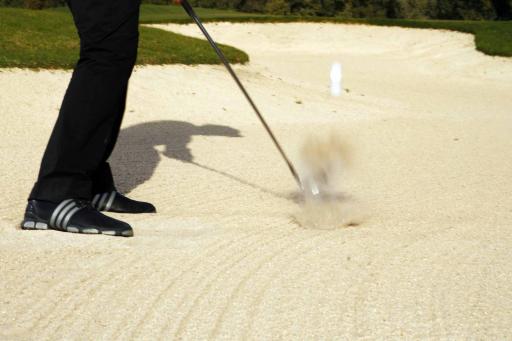 Sergio Garcia is one of the world’s best when it comes to bunker play. He’s had a good teacher – his dad Victor.

Golfmagic caught up with the former professional from the Club de Golf del Mediterraneo in Spain when he competed at the Wallonia Open on the European Seniors Tour and begged a few tips on bunker play.

“With me and Sergio it is very similar with the little finger of the right hand locking into the space between first and second fingers of the left. This gives good stability to the swing and keeps the hands from slipping on the handle. But you don’t want to grip too hard – this makes a lot of tension in the shoulders which is not good.”

“It is important to stand a little open to the target (the line between the toes face slightly to the left). Knees and shoulders should be parallel to this line. At address concentrate on holding the club just above the sand and picturing in your mind where the ball will enter the sand – about 3-5 cms behind the ball.”

“The bunker shot is not like most golf shots. You are not trying to start the take-away on the inside, then bring it back square. You are trying to throw the ball out with cut spin. This means when it lands it will pitch and spin from left to right.

“To do this aim the leading edge at the flagstick, but take the clubhead away from you on an out-to-in path.

“If the sand is wet, hard and compact you have to swing a little harder – more aggressive.”

“Like all golf shots it is important to keep a good rhythm – even more so in bunkers. If you watch Sergio he is never hurried in sand. He settles his feet to get a strong hold to avoid slipping, looks up a couple of times to pick a spot where to land the ball and then gets a feel for the shot by taking the club away a couple of times on the correct angle.

“When he is ready he will swing with good rhythm and tempo and bring the club to a high finish. He enjoys bunkers and plays them very naturally.

“Bunkers are not something to be scared of. With a simple technique amateur golfers will get the ball out nearly every time. Bunkers are fun.”