'One of the best ways to improve is to find a distance with which you are comfortable, then practice hard to become brilliant at it.' 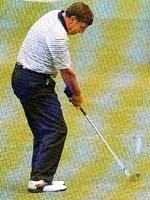 Practice hard at your short game

So what’s the distance you feel most comfortable with when hitting a golf ball – full out driver or a three-foot putt? Or is it somewhere in between?

While most of us have our favourite club in our bag we should know the distance over which we have most control. For many it’s anywhere between 50 and 100 yards – the scoring zone.

But how often do we practice to get really good from that specific range? Rarely, if at all.

I was up at The De Vere Belfry’s PGA Academy this week and top coach John Cook really opened my eyes about the short game.

He has had years of experience, not only as a former winner on the European and African Tours but also as a regular teaching contributor to top magazines and as a current coach to many of the game’s future stars.

"The short game is so important but club golfers rarely practice it enough, " he told me. "One of the best ways to improve is to find a distance with which you are comfortable, say between 60 and 90 yards, then practice hard to become brilliant at it.

"And instead of trying to become average over a range of distances from 100 yards in, home in on a specific distance – 75 yards for instance – and you will find the adjustment to hit your target so much easier. It’s just a case of adapting to the loft of the club in your hand."

John, who will be writing a series of instructional articles shortly, exclusively for Golfmagic, says finding the right distance is governed by your practice range.

"If the flag distances are not identified on the range wall, pick a quiet moment and step out the distance of one between 60 and 100 in yards, so you know exactly how far you are hitting the ball. Then you can build your short game around that."

It’s excellent advice and during the course of his series John will help develop dozens of tips to help Golfmagic readers improve their game.

He certainly helped me within seconds. While writing a series of reviews on the latest wedges my chipping and pitching had become sloppy and inconsistent.

But by positioning the ball slightly different in my stance and imagining I was chipping under an imaginary hurdle, I suddenly developed a better strike.

John’s new series, from short putts, to 50-yard bunker escapes will start shortly, so look out for it.

Want anymore short game tips? check out how to chip with Nick Faldo or chip with a 3 wood