Matthew Fitzpatrick chipping: Why US Open champion uses this method

This is why US Open champion Matthew Fitzpatrick chips like this and the pros and cons of the method. 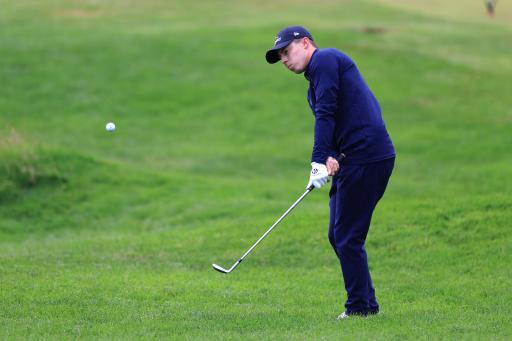 Matthew Fitzpatrick won the 2022 US Open with a simply breathtaking performance at The Country Club at Brookline.

It was, of course, the scene of his 2013 triumph at the US Amateur Championship and he joined esteemed company with his victory.

His victory meant that only he and Jack Nicklaus are the only players to win the US Open and the US Amateur at the same course.

One thing that caught the attention of golf fans was his cross-armed chipping technique.

Fitzpatrick has been using the left-hand-low method for a while and it certainly appears to be working for him.

Fitzpatrick's short game was incredible all week and remarkably it was his usually reliable putter that at times was letting him down.

Especially at short range, Fitzpatrick had to resort to binning birdie putts from 60ft to get the job done.

His caddie Billy Foster later joked that he putted like Edward Scissorhands and still won a major.

"Had a few questions around the change to cross handed chipping," he wrote.

"[The] main reason is that I'm just chipping better. More consistent, know that it will always be the same strike, flight, speed and spin.

"I know how it's coming off every time and that's been the biggest thing for me."

"Give it a chance if you're going to give it a go, though you will definitely shanke the first few."

Should you try it?

GolfMagic reached out to PGA professional David Nickson, based at Royal Ascot Golf Club, for his opinion.

Nickson said: "One pro is that it enables players to keep their hands quieter through impact and get away from flipping, meaning less tops and more conistent impact."

He added: "One con is that it is tougher to keep hands in front of the ball at impact. It also puts in a different variable from other shots. Generally, you want to avoid having completely different grips and swings for different shots.

"At what point / yardage do you start to cross over your hands?"

Have you tried it?

Let us know how you get on our social media channels:

Next page: Improve your alignment with a DP World Tour player