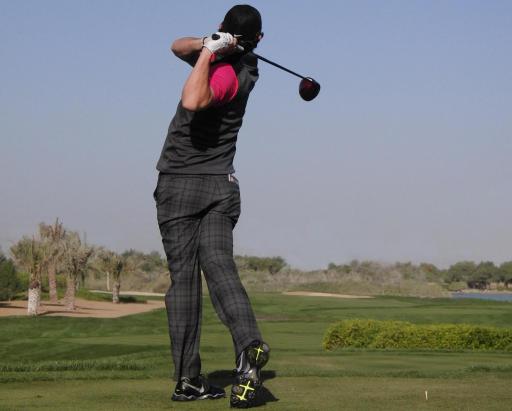 RORY MCILROY bounced back to winning ways for the first time with new Nike equipment in 2013 with a come-from-behind win at the Australian Open.

IN THE BAG: RORY MCILROY

From this series of snaps, we can see exactly why McIlroy ranks in the top ten in driving distance on both sides of the Atlantic and generates a ball speed of 176mph.

Into the backswing and McIlroy’s hips move in relation to his shoulders as he winds his torso against his hips. As he moves to the top, he maintains great flex in his right knee.

As McIlroy progresses into the downswing, you really begin to see where he gets his power from. He does a little squat as weight shifts back to his lead leg and he then tucks his pelvis to ensure he transfers energy from the lower body to the torso.

At impact, his hips and chest remain open to the target as he clears his left side and he then pushes off his right foot and releases fully.

Follow @Golfmagic for all the latest equipment reviews, news and instruction.