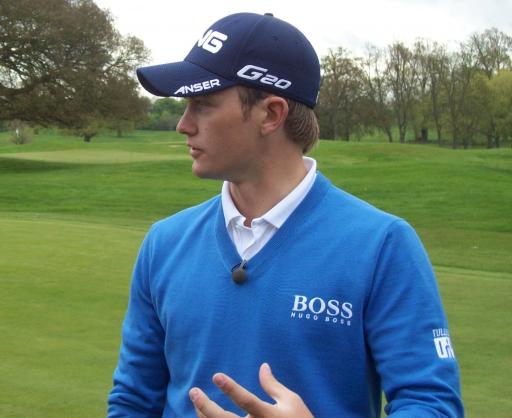 Various members of Golfmagic’s staff have not been getting the rub of the greens recently, so meeting PING staffer and European Tour sensation Tom Lewis for a putting clinic at Marriott’s Hanbury Manor couldn’t have come at a better time.

Lewis, who fired the lowest single-round score by an amateur in Open Championship history before going on to land the Portugal Masters in just his third professional start, explained how he likes to work on three stages of putting: technique, pace and holing out.

Here’s what the 2011 European Tour Rookie of the Year had to say about technique...

In terms of technique, I want to get my eye line directly over the ball, so I use a mirror. The eyes are exactly centred over the ball, making it easier to see the line. I then place a club on the floor and keep the shoulders square with the feet in a line parallel to the target line. All of this just makes sure you’re in the right position.

I recommend that you work on this for approximately ten minutes, hitting putts from eight to ten feet. Try and find a straight putt on the green and aim to make a nice strike out the centre of the club.

It is important to keep down, rather than coming up too early through impact, especially in practice as it will provide you feedback and help you to learn what you have done wrong. If you stay in the shot longer and keep your head still the strike will be better.

I will sometimes putt one handed in practice to gain greater feel with my right hand, like Tiger. He putts very much with his fingers, which helps to rotate the putter.

With PING, the sticker on the shaft of my putter says Slight Arc. The putter needs to suit your stroke, it’s very important you check this out. I arc the putter a little bit during my stroke but I want to square it up to gain more consistency.

The good thing about my putter is that it counteracts what I’m trying to do. I generally rotate the putter, but this putter is saying ‘no’.

In terms of practising technique, it doesn’t have to be with a mirror, just anything that works for you. Just make sure you’re lining the feet up with your shoulders parallel with the target line. The mirror does that for you anyway.

It’s important to work on technique first so that when you go onto pace putting, you’re not worrying about your stroke.”

Next time, I’ll explain how to work on the pace of your putt. Stay tuned to Golfmagic for more.

Do you have a pre-round putting routine? Tell us in the forum, via our Twitter feed, or on our Facebook page.