Face up to your putts side-saddle! 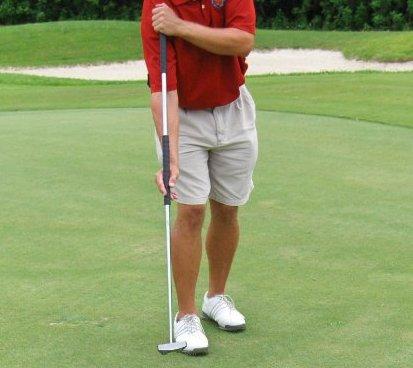 “You’re out with an American guy,” the caddie master told me as I rolled up at St George’s Hill golf course to supplement my income. “Apparently he’s got an unusual putting stroke.”

I was wondering what he meant by ‘unusual’, when a Bentley Continental GT slowed to a halt in front of me and out stepped my employer for the next five hours.

I was momentarily distracted by the size of tip I might receive, before my thoughts came crashing back to reality when I pulled his flatstick from the bag.

“It’s a custom-made Golf Advantage putter, used for face-on or side-saddle putting,” he told me.

We lined the putt and I stepped away. He took one look at the hole then poured it home, croquet style, for a birdie three. “Great read,” he said as I stood red-faced on the edge of the green, gobsmacked as to how he even made contact with the ball.

As the putts continued to drop, the simplicity behind face-on putting soon became apparent. Yet more importantly, truth over tradition.

The benefit of the stroke is that you’re rolling the ball to the target with your eyes locked towards the hole, rather than from the side like in traditional putting. It also delivers fantastic consistency and regularity.

Make sure you're aware of the new rules with anchored putting though. Okay, you may not be on the PGA Tour in 2016 but it might be worth looking into the anchored putting ban to see if the side-saddle technique you're using would in fact be illegal in competition.

How to putt side-saddle

There’s no question this form of putting requires far fewer moving parts than a traditional stroke. The club face stays pointed down the target line throughout the entire putt, which would appear far simpler than the open door or closed door technique used by traditionalists.

Furthermore, it’s easy to swing the putter straight back and straight through when the putter is anchored on your shoulder muscle above the target line. It effectively reduces the upper body range of motion, shoulder rotation and total body motion needed to execute a successful putt.

The ball is played just outside and level with the toe. The putting hand is placed somewhere between one and two-feet below the anchor hand, creating a 90-degree angle at the elbow joint. The putter should ideally be held between the thumb and index finger for greater feel.

Both feet must remain on the same side of the ball, as straddling the ball or placing one foot behind the ball does not conform to the Rules of Golf.

You do need a special putter to perform this action, but there are plenty of manufacturers that make them. You can also try it out by bending a long putter more upright as long as it has a curved sole.

Do any Tour players use it?

Seven-time major champion Sam Snead pioneered the side-saddle in the 1960s, after initially putting the ball from between his legs like a croquet action.

But the USGA banned Snead’s action in 1968 by amending the old Rule 35-1, though until that time, golfers had always faced the ball when striking. So Snead adapted to a side-saddle approach, where he crouched and angled his feet towards the hole and held the club with a split grip (pictured left).

Other players who have made the leap to this irregular form include KJ Choi, winner of this year’s Players Championship, albeit for a few events in the summer of 2010, and Gary McCord on the Champions Tour.

What do the experts say?

I got home and I scrolled through my Dave Pelz Putting Bible. The US putting guru comments: “The side-saddle putting technique produces consistently the best putting I’ve ever seen - and it’s legal.”

And who can argue with a man famed for his expertise in the art of the short-game?

Andy: Face-on putting is an extremely simple way to putt a golf ball on line time after time, though I personally believe 99% of amateur golfers would never try it because of the thought of being ridiculed in the clubhouse.

I’m certainly one of this majority, yet in the back of mind I’m haunted by the notion this is the best way to putt. If your putting is lousy, why not become a revolutionary and give it a try?

Alex: Many of you will have heard of legendary golf writer Clive Agran. The first time I played with ‘Silky’, I stood on the first green with my jaw to the ground as I watched him putt side-saddle. It became a regular topic of conversation for the rest of the round – as I’m sure it will have with any of you who have partnered someone playing this way.

It works for Clive, but would I try it? I’m currently putting a lot of work into my regular putting stroke in a desperate attempt to get better. So no, not a chance.

Bob: I could see me trying the Snead way (pictured) if really desperate, after all I've tried almost every other way to get the ball in the hole after 40 year. In fact I once interviewed an eccentric cartoonist who was convinced he could sell a method using a 12-inch putter!

In the meantime I'm very happy with my putting having had a lesson from the self-confessed 'best putter in the world' Dave Stockton, who coached Rory McIlroy to a successful new method on the eve of the US Open.

Want anymore putting tips? Check out our articles on...