What's that thing Adam Scott does before he putts?

There is method to Adam Scott's putting madness. AimPoint Express. 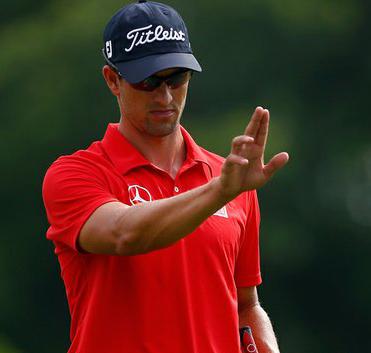 Before I knew anything about Adam Scott's putting routine back at Colonial in 2014, I initially thought the former world number one was just admiring his new wedding ring.

Two years later and still in tact, it's Scott's go-to putting routine that allows him to stand over the ball and read putts on a more consistent basis by himself.

Learning more about this green-reading technique, see video above, it all stems from Mark Sweeney's founding of AimPoint Technology, which is that rather clever technology we see on a weekly basis when Golf Channel broadcasts the PGA Tour.

Sweeney developed a popular AimChart based on the theory that greens have slope and all break the same way water runs downhill. By circling the hole to find where water drains, a golfer can estimate where 12 o'clock and 6 o'clock are on the green, pinpoint his ball’s location on the clock, and consult the chart to know how much break to play.

Stacy Lewis, former ladies world number one, was the first LPGA Tour player to use it more than five years ago and now many more are following suit.

Yet Sweeney found AimChart too complicated to teach to his young students. A couple of years ago he accidentally discovered Express Read, which is more feel-based and reduces his system to a single variable: How much slope is there?

For putts of more than six-feet, Sweeney teaches his students to measure the side slope on a scale of 1-10, with 1 being very flat and 10 extremely steep (7 is about the max).

Brad Malone, Scott’s coach and brother-in-law, was the man responsible for persuading Scott to experiment with a long putter in 2011, and he did the same when it came to AimPoint Express Read after being taught it in Hawaii in early 2014.

In simple terms and to reflect how Scott goes about his business on the greens these days, he determines a numerical value for the slope of the green and holds up that many fingers less than an arm’s distance in front of his face to pick the line. If he feels like the putt will break left, he measures his fingers beginning at the right edge of the hole.

How do you read your putts? Do you have a go-to routine? Ever used AimPoint Express Read before? Going to use it this weekend? Share your thoughts in the forum below or tweet us @GolfMagic