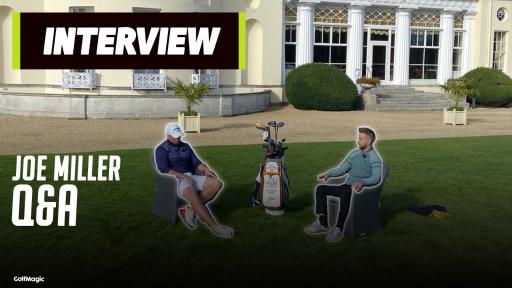 GolfMagic caught up with two-time World Long Drive champion Joe Miller at the stunning Stoke Park Golf Club this week to talk all things golf, how he crushes balls more than 400 yards for fun, and his thoughts on Bryson DeChambeau's dramatic transformation on and off the course.

Watch our latest video interview with Joe Miller, who is an ambassador of Stoke Park GC:

2020 has obviously been a difficult year for us all... how have you been keeping busy?

Yeah I've just been trying to keep my head above water. We are all in unknown territory. It's been a difficult one for myself with competitions and corporate days stopping etc, but I am really looking forward to next year. I am still practising hard, still working hard in the gym, and keeping my mind occupied because it's quite easy to slip into bad habits during lockdown, but 2021 is not far away and I'm looking forward to it.

How did you cope with no gyms at the start of lockdown?

Two parts of my day are normally golf and gym, so I've had about 18 weeks off in all honesty. I first stepped foot in a gym when I was 14 years old with my brother and he showed me the way. That has been my lifestyle for nearly five days a week, sometimes six days a week. When the gyms closed, you look for alternative means, but there is just no substitute for that heavy iron on your back when you are squatting 500 or 600 lbs and pulling it from the floor. So yeah, I had 18 weeks rest and it was probably a welcome rest, but now gyms are back open and we are back on track so things are going good.

How's the driving at the moment? I know you had some golf days in Tuscany last week?

Yeah it's good. My last travel bag tag was actually September last year, so it was nice to get back into some sort of routine with corporate days in Tuscany on Saturday and Sunday. It was nice to be out there and have a feel of normality again.

Now when I spoke to you a few weeks ago, you told me Bryson DeChambeau was going to win the US Open. You were absolutely spot on. What did you make of that victory?

Thanks, though I'm not sure I would have predicted a six-shot win! He went out there and destroyed the golf course. He drove the ball fantastic. He might not have led the field in distance that week but he was certainly up there. It was more his short game, and his putting that contributed to his first major win. He just destroyed the field and that is what can happen when everything comes together like that.

What do you make of his body transformation and his increased clubhead (150mph) and ball speed figures (200mph) this year? Is this all sustainable moving forwards?

It is 100% sustainable. The people who say it's not just don't understand how this works. He will maintain that as long as he takes care of himself. Over the years, I've seen it in long driving and I've been doing it 18 years now. You see some guys peak for a year or two years and then they tail off. I've been one of the fortunate ones... back in 2010 when they started using TrackMan and other swing measuring devices, and I was 150mph back then and I still am now. I've probably swung more drivers on the planet than anyone else and at faster speeds for over 10 years now. I've got no injuries - of course I've got a few aches and pains every now and then but nothing that stops me doing my every day stuff. It will be hard for him, as it will become a new lifestyle. Diet becomes number one, and then the weight training, but if he builds his body strong, strength is never a weakness. It will be vital for him to keep on top of all these things going forward, but it's easily done.

Apparently he's been drinking seven protein shakes a day? What do you make of that?

That's incredible. I'm not sure if that's true but I'm not sure how he keeps out the bathroom if that is the case! For someone in his position, with travel and playing golf four or five rounds a week, protein shakes will be vital for him. The nutrition is number one, so even if he blends his food and drinks it, all that will be beneficial to him. If it's working for him, I can't say it's a bad thing for him.

Rory McIlroy looks to be going after Bryson on social media this week with a 357-yard carry on one drive with a 191mph ball speed. Excited to see those figures?

Absolutely. Rory is one of the best drivers of the ball. Not to bash Quads but they do over read ball speed compared to a Flightscope or a TrackMan, and they are 5 or 6mph quicker, but regardless of that I think he could quite easily step on that a bit more. High 180s is impressive. If he gets his putting going ahead of The Masters, who knows what sort of damage he can do there as he goes in search of a career grand slam. We could see something around Augusta that we've not seen before in terms of driving distance.

So after picking Bryson for the US Open, who is your pick for The Masters?

I'd like to see Bryson do well again. It's just so exciting to see, albeit not as exciting as Tiger Woods back in his day. That probably won't ever be done again, but to see Bryson hitting it these distances right now is great. He will need to shape his ball a little better to win at Augusta, and I don't know whether he's quite got that in his game just yet, but if he does get the driving going and is hitting wedges into those par-5 holes as opposed to long irons and woods, it will be interesting. I'll go for Bryson.

What driver are you currently using and in what specs?

What's the longest drive you have ever recorded?

The longest drive I ever recorded in competition was 474 yards, which wasn't bad. I once drove a par-5 at 560 yards at another one of my golf clubs, the London Club. Downhill and downwind and hard fairways, don't get me wrong, but it was still a decent hit.

What's the rest of your game like and do you have a handicap?

No officially I don't have a handicap, but if I did give me one it would be around scratch and +1. My putting is probably similar to McIlroy's at the minute, it's not the best, but my short game and chipping is usually pretty good. If I can drive it in play, the rest takes care of itself.

Do you ever think you could make it big on WWE?

Without ever thinking about it, that's a new life goal. Those guys are huge, but who knows?! It's more of an acting skill now than a wrestling skill. I think the last time I watched that the Ultimate Warrior was fighting Hulk Hogan for the third time. Those boys are crazy but it would be good to give a go. I think it's a little out of my reach even.

Are you doing specific workouts to hit the ball that far, and if so what are they?

In general no, I would never go into a gym with the intention of bringing the golf swing in there. I keep them separate. If anyone wants to gain distance, just become strong, a better version of what you are, and get a bit fitter and leaner. How you do that is to keep it basic... squats, bench presses, shoulder presses, dead lifts, multi-joint movements, become good at them and then take it out onto the course. You've got a new package then. Try to become twice as strong and then you've got something to work with on the course and range.