EXCLUSIVE: GolfMagic catches up with Steve Winters - CEO and Founder of Grey Pocket - after the brand was recently named 2020's 'Most Innovative Brand Design Agency'... 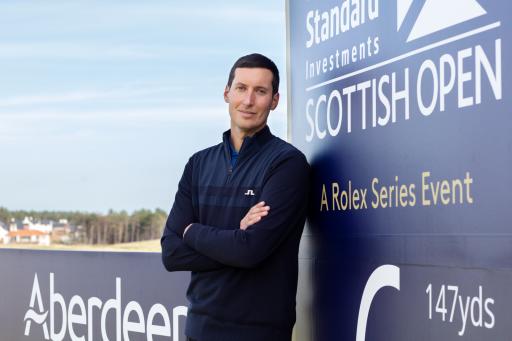 With no spectators on show at this week's Scottish Open at The Renaissance Club, creative and branding specialist Grey Pocket is ready to give golf fans a digital offering that reflects the stunning essence of this North Berwick gem.

Fresh off their recent success in the Business Excellence Awards where Grey Pocket was named 'Most Innovative Brand Design Agency - London' for 2020, GolfMagic caught up with the company's CEO and Founder Steve Winters to learn more about their work with The Renaissance Club, venue of this week's Scottish Open, and their continued plans to innovate and create...

Steve, where did your love of golf originate and how did Grey Pocket first come to light?

My dad always told me that golf was a rich man's game. Growing up on council estates, I could sort of see his point.

However, I do feel in recent years that golf has become much more accessible. I fell in love with the sport about 10 years ago, so you could say quite late compared to other people that have taken up the game.

I stopped playing football and I suppose golf appealed to my creative mind. I actually started playing cack-handed, with what probably would be a considered a 54-handicap, so it definitely required a certain level of creativity.

The first proper office Grey Pocket ever had was actually on the golf course in 2014 at Chelsfield Lakes Golf Course in Kent, so I guess you could say our connection with the sport first began there as we helped them out on their brand.

What have been some of your proudest achievements to date in the golf sector?

Grey Pocket has been very lucky to be involved in so many golf and sporting situations.

One of my proudest achievements was being the digital and creative partner for the Old Course Hotel for five years.

This led us to assisting with their creative and media at the 2015 Open Championship at St Andrews, as well as the Dunhill Links during that period.

We also acquired a golf media company in 2015, Golf Juice Media. This led to us producing a mini series that aired exclusively on Sky Sports.

I don't think I've ever commented on this before, but we received a lot of mixed feedback. Whilst viewing figures for the show were positive and the show gave me a lot of satisfaction, there were lots of areas I believe we could have improved on.

On reflection, and it has taken some time, when you look back at what we achieved five years ago in terms of getting a fun golf show on Sky Sports and being able to produce four episodes in less than two weeks, we have to be pretty proud of that achievement.

To make it something that Sky were comfortable with... that was not an easy task.

I am very grateful for JJ (Johnathan Joseph aka DJ Spoony), Jimmy Bullard and Zoe Hardman for fronting the show for us and to all the guests that appeared on the show. There are no plans to bring Golf Juice back anytime, but you never know!

We were also lucky enough to be involved with Tommy's Honour - a golf film all about Old Tom Morris played by the brilliant Jack Lowden. I was also asked to host a film premiere in St Andrews which was pretty cool.

In 2020, we have been appointed the creative, digital  and media partner for The Renaissance Club, host to the Scottish Open.

That leads us nicely into our next question. How proud are you to be working with The Renaissance Club?

We are extremely proud to be working with The Renaissance Club, host of this week's Scottish Open.

Our appointment here comes at a challenging time for large sporting events such as this one, and in the absence of physical spectators on the course, it's been extremely important to make sure the club's digital presence reflected the incredible venue.

It's been a very tight turnaround in terms of launching their new website and creating new marketing assets in time for the Scottish Open, but we very much look forward to developing those further throughout the tournament and over the coming months.

Who do you reckon will be the man to beat this week?

It's difficult to predict the winner this week, but I guess Tommy Fleetwood will start as a fairly warm favourite.

Then you've got to give the likes of defending champion Bernd Wiesberger a good chance, as well as Matt Fitzpatrick, Martin Kaymer, Thomas Pieters and rising star Rasmus Hojgaard.

Other star names in the field include Ian Poulter, Lee Westwood and Matt Wallace. It's a really strong field and it's great to see so many big names coming over here to play, especially during these difficult times.

In this second consecutive year of The Renaissance Club @therenaissanceclub hosting The Scottish Open and Ladies Scottish Open, Grey Pocket were delighted to be appointed their branding and digital agency. With the challenges that 2020 has brought us all, it became clear that in the absence of physical spectators for this year’s events, there would be more eyes on their virtual presence and it was therefore vital that The Renaissance Club’s digital offering would reflect the stunning essence of this prestigious venue. The site includes updates to the branding, brand new design and functionality as well as photography from their new image library that we are creating. For the duration of The Open and in this period of developing the new website and digital brand standards, Grey Pocket will manage the all aspects of creative, digital and media for The Renaissance Club.

From a personal point of view, I would love to see South Africa's Brandon Stone win the tournament again, just as he did at Gullane in 2018.

Several years ago, I walked around the course with him as he was paired with a friend of mine in the Open Qualifying event at Sunningdale. He didn't have a caddie, he was pushing his own trolley and sadly didn't go on to qualify.

Just a couple of years later, it was great to see him go on and win the Scottish Open. It's always great to see hard work and perseverance pay off like that, so I'm really looking forward to seeing him play again here in East Lothian.

What I can tell you is that The Renaissance Club looks absolutely immaculate and so far the unpredictable Scottish weather seems to be holding up, so I think we are in for a spectacular week of golf.

How tough has the coronavirus pandemic been for your company, and are you confident that many people's seemingly newfound love of golf across the country will remain moving forwards?

The initial uncertainty that came at the beginning of the pandemic was certainly challenging. We had to be pretty resilient and reactive to our clients' needs.

I think most people have had to adapt and change their lifestyles throughout the lockdown. For many people, there has been the opportunity to make some positive changes, especially by just getting outdoors, getting some exercise and playing more golf.

The day the courses were allowed to reopen again felt like such a celebration and it served as a great reminder not only of the joy of playing golf but also the importance of the community and camaraderie of fellow golfers.

I do feel confident that golf, and many other outdoor sports, will continue to flourish when the world returns to normal, and who knows, maybe there will even be a few more cack-handed golfers out there!

What plans are in the pipeline for Grey Pocket, and where do you see the brand in five years time?

Having this year picked up two awards - 'Most Innovative Brand Agency - London' and 'Innovation & Excellence' - we very much hope to continue to innovate and create.

Outside of golf, we have just completed some work on a new community sports app, we are working with a fashion brand that is set to launch in 2021 and we have some exciting work planned with a newly formed sports management company, Consilium Sports Group.

We have also been working alongside Stroke Active & Neuro Pro Active to launch an app to support the NHS and their service users to enhance care following a stroke or brain injury. This comes at a time when we were reminded of the value of the NHS, and it has been humbling to be a part of.

With so much renewed interest in golf, sport and leisure, we see Grey Pocket only going from strength to strength over the coming years as we continue to work with some incredible venues and brands.

We have been extremely fortunate to develop some really strong partnerships and we look forward to working on some more interesting projects, whilst we continue our quest in hiring some really good people.