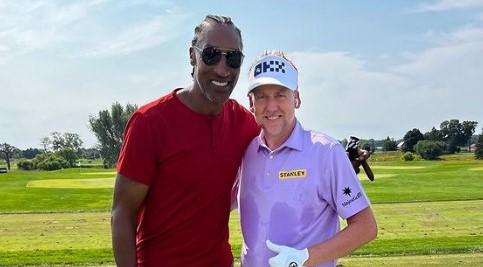 For the fifth event of its inaugural season, LIV Golf has acquired the services of one of basketball's most famous faces to greet the fans and promote the event.

They may have failed in their attempt to employ former NBA MVP Charles Barkley to their broadcast team, but they were successful in getting Scottie Pippen on board for the event at Rich Harvest Farms.

Pippen, 56, spent two periods at the Chicago Bulls. His first tenure was the one where he became a superstar. Between 1987 to 1998, he won six NBA Championships and became a seven-time NBA All-Star.

He is one of many former kings of the court who now enjoy their golf in retirement. Barkley has appeared in many celebrity golf events, while the great Michael Jordan often used to walk the fairways with Tiger Woods.

Ahead of the event in Chicago, which is currently led by Dustin Johnson after the first round, Pippen appeared in a promotional video for LIV Golf that particularly endorsed the concept of team golf.

At the end of the video, Pippen begs the question: "Is there a new dynasty in golf?" LIV Golf is certainly challenging the established order of the PGA Tour by recruiting some of the game's most recognisable players with lucrative contracts.

Pippen played in the pre-tournament pro-am on Thursday and he took the opportunity to meet some of the players including European Ryder Cup hero Ian Poulter.

"Two people who’ve had success in Chicago," was the caption accompanying the picture that Poulter posted on his Instagram page, referencing Europe's miraculous comeback at the 2012 Ryder Cup.

LIV Golf could barely have chosen a better ambassador for team golf in Chicago than Pippen. The team format, which has been dominated by 4 Aces in the last three tournaments, is something rarely seen on the PGA Tour.