Charles Barkley has been eyed up by Greg Norman as a potential addition to the LIV Golf broadcast team, but the American currently works for TNT. 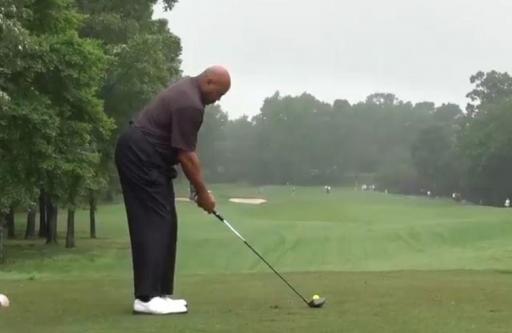 11-time NBA All-Star Charles Barkley sent a stern message to Greg Norman and LIV Golf on his potential move to their broadcast team.

Speaking on the Dan Patrick Show, Barkley doesn't want to keep TNT, his current employers, waiting on him while LIV Golf decide whether to make another addition to their broadcast team.

Last week, the 59-year-old revealed he would be playing in the pro-am ahead of the LIV Golf Invitational at Bedminster, which is the third event of the new Saudi-backed series.

He has already had discussions with Norman who has recently acquired the flamboyant services of former CBS and NBC broadcaster David Feherty to join the likes of Arlo White and Dom Boulet in their broadcast team.

"I’m not gonna keep TNT in limbo. To be honest with you, I don’t think it’s fair to them. (LIV has) gotten plenty of play out of me coming to play up there Thursday. So I’m not just gonna be no show pony," Barkley said.

-Charles Barkley says he has not received an offer from the #LIV Tour yet pic.twitter.com/mUHHQExEZn

"When I leave New Jersey Thursday night, when I leave the golf course, if I don’t have an offer in hand, it’s over."

Barkley, who played for the Philadelphia 76ers, the Phoenix Suns and the Houston Rockets, currently works on Inside the NBA for TNT alongside Shaquille O'Neal, Kenny Smith and Ernie Johnson.

He has previously been involved in the broadcast of The Match and he played alongside Phil Mickelson in its third edition against Steph Curry and Peyton Manning in November 2020.

Mickelson will forever be known as one of the pioneers of the LIV Golf Invitational Series, despite taking time away following his controversial comments to Alan Shipnuck.

It would appear that the divisive new tour is looking to add personality and entertainment to its transmission and Barkley would certainly provide this with his popularity and profile in America.

Next Page: Eddie Pepperell on why he'd turn down £20 million offer, four-year deal from LIV Golf