Phil Mickelson believes the PGA Tour and the LIV Golf Invitational Series need to work together as "divisive talk is doing nobody good." 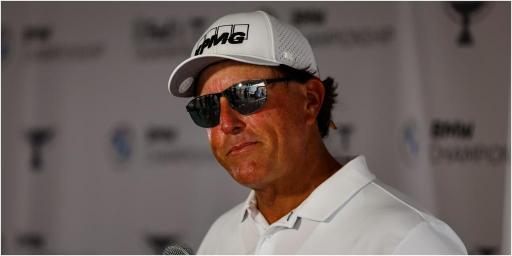 LIV Golf player Phil Mickelson believes the best players in the world will never belong to the PGA Tour now that the LIV Golf Invitational Series is on the scene.

Speaking after the first round of the Chicago Invitational, Mickelson expressed his desire for the PGA Tour and LIV Golf to work together with the professional game riddled with hostility.

The PGA Tour has made big changes to its schedule in 2023. They have introduced four new Elevated Events, 12 in total, and they will all feature prize purses of $20 million.

These sudden changes were made to counter the threat of the LIV Golf Series which has signed the likes of Cameron Smith, Dustin Johnson, Brooks Koepka and Bryson DeChambeau.

After being suspended by the PGA Tour, Mickelson and DeChambeau were two of the 11 players committed to the antitrust lawsuit against the Tour. This case is not expected to begin until 2024.

Legal proceedings were inevitable and despite being both resentful and thankful for the Tour in previous months in 2022, Mickelson wants cooperation.

"The PGA Tour for the last 20 or 30 years have had all the best players in the world. That will never be the case again. LIV Golf is here to stay, and this type of divisive talk is doing nobody good," Mickelson said at Rich Harvest Farms.

"The best solution is for us to come together. I think that the world of professional golf has a need for the old, historical history of the game product that the PGA Tour provides, and I think that LIV provides a really cool, updated feel that is attracting a lot younger crowd, and that's being proven in the people that are watching and the age of the people that are watching.

"As soon as that happens and we all start working together, that's going to be a really positive thing for everyone."

The six-time major champion used these words in response to a reporter who spoke of Kevin Streelman, a PGA Tour player who is reportedly "upset" about the lawsuit which has accused the Tour of "crafting an arsenal of anticompetitive restraints."

On Thursday, it was reported that Mickelson could leave the lawsuit now that LIV Golf has attached itself to the action. He would become the fifth player to change their mind.

Carlos Ortiz, Pat Perez, Abraham Ancer and Jason Kokrak have all withdrawn themselves. If Mickelson was to do the same, this would question the strength of the lawsuit with just DeChambeau, Matt Jones, Talor Gooch, Hudson Swafford, Ian Poulter and Peter Uihlein holding their ground.

In the first round of the fifth event of LIV Golf's inaugural season, the 52-year-old carded 2-under-par to sit seven shots behind Dustin Johnson.