Bryson DeChambeau will not resign his PGA Tour membership but he will take part in the next LIV Golf event in Portland. 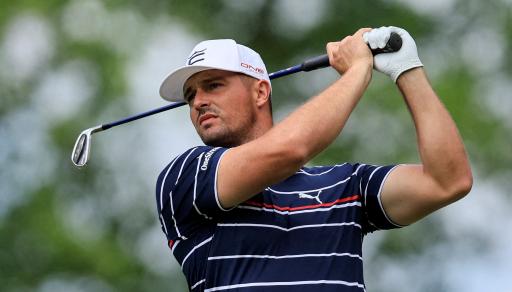 Bryson DeChambeau will play in the second LIV Golf Invitational Series tournament in Portland, despite just last week ruling himself out of competing in the controversial Saudi-funded circuit any time soon.

DeChambeau, who has been ruled out for the majority of the year on the PGA Tour as a result of wrist surgery, plans to still retain his PGA Tour membership despite breaking away to play in the LIV event at Pumpkin Ridge Golf Club from June 30 to July 2.

"For me, I personally don't think that at this point in time I'm in a place in my career where I can risk things like that (LIV Golf)," DeChambeau said at the Memorial Tournament last week.

Five days later and DeChambeau has gone back on his word and committed to LIV Golf for the circuit's first event in the United States.

"Having the opportunity to get in on the ground floor of something unique has always been intriguing to him. Professional golf as we know it is changing and it’s happening quickly."

DeChambeau, 28, was strongly linked with a move to LIV Golf at the start of the year, with huge sums of money put aside for him should he have been tempted. It was at least a six-figure sum, according to many reports at the time.

As all the stars of the PGA Tour turned LIV Golf down one by one, DeChambeau was one of the last names to confirm he was not going to be joining Greg Norman's breakaway Saudi golf league.

But fast forward to the present day and DeChambeau will now be giving LIV Golf a go after having seen the likes of Johnson, Phil Mickelson and others make the first move away from the PGA Tour.

Patrick Reed is also understood to be making the move over to LIV Golf, as too Rickie Fowler.

The PGA Tour have made it clear that anyone playing in LIV Golf events will face a ban on their circuit as a result.

Some players have decided to not have bring that into the equation simply by resigning their PGA Tour membership, such as the likes of Dustin Johnson, Sergio Garcia, Charl Schwartzel, Louis Oosthuizen and Branden Grace, who are all competing in the LIV Golf Invitational London tournament at Centurion Club this week.

It remains to be seen what the next steps are from the PGA Tour, especially after this monumental week of golf transfers.