Justin Thomas: "Selfishly, I think and I know that the PGA Tour is the best place to play in the world." 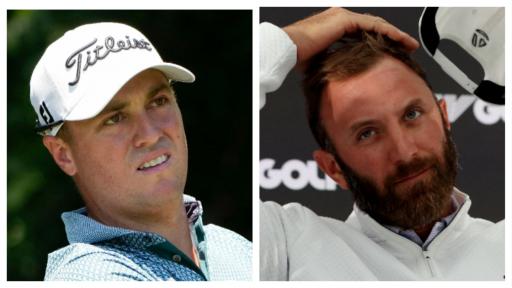 Justin Thomas says he is "disappointed" to see a number of his PGA Tour peers such as Dustin Johnson and Phil Mickelson break away to join the Saudi-funded LIV Golf Invitational Series.

Just as Thomas was speaking ahead of the Canadian Open on the PGA Tour, news was breaking that Bryson DeChambeau and Patrick Reed, and possibly even his good pal Rickie Fowler, will also be heading to Greg Norman's controversial new circuit.

Johnson, who has been paid $150 million to join LIV Golf, has made the biggest decision of all the star names so far by resigning his PGA Tour membership, despite having won 24 times on the Tour and ranking third in the all-time career earnings with just shy of $75 million.

While Thomas has no hard feelings for the Saudi golf rebels, he is disheartened to see them leave what he and many others consider the greatest golf Tour in the world.

"I think a lot of us are, I don't know if annoyed or tired is the right way, it's just one of those things," said Thomas.

"I've thought a lot about it and people are entitled to choose as they wish.

"I don't dislike DJ [Dustin Johnson] now, I don't think he's a bad dude. I'm not going to treat him any differently, he's entitled to choose as he wish.

"I think the day and age that we live in now, it's just so negative that you see it in everything... sport, politics, whatever it is, it's like if you disagree with someone and you just feel entitled to hate them, talk bad about them and just bash their decision when everyone is entitled to their opinion. It doesn't make you a bad person.

"Now, I'm disappointed and I wish that he [Dustin Johnson] and others wouldn't have done it but that's their decision.

"Selfishly, I think and I know that the PGA Tour is the best place to play in the world, and the decision is theirs.

"It is what it is. I just wish it wouldn't be taking away from the great storylines that are going on on a Tour that has been around for a very long time, and is in one the best places it has ever been in. It's just a bummer that these guys won't be a part of it."

Next Page: Ian Poulter on joining LIV Golf - "There is so much more to it than the money"