Phil Mickelson and Dustin Johnson will play with Scott Vincent in the first round of the LIV Golf Invitational Series at Centurion Golf Club. 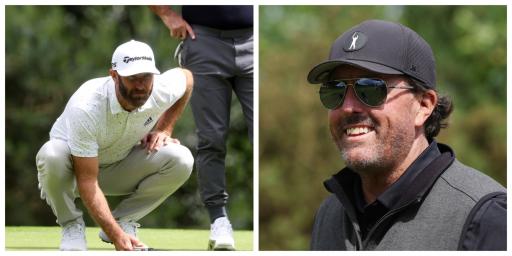 Phil Mickelson and Dustin Johnson will tee it up together on the 1st hole in the first round of the LIV Golf Invitational Series at Centurion Golf Club near London.

The American pair, with 8 major championships and 69 PGA Tour wins between them, will play with Scott Vincent in the shotgun start format on Thursday.

Mickelson and Johnson are undoubtedly the biggest names to defect from the tour to the breakaway league commissioned by Greg Norman.

Mickelson, 51, intends to keep his lifetime membership on the PGA Tour, whereas Johnson has joined Sergio Garcia, Kevin Na and Louis Oosthuizen in resigning.

Garcia will tee off from the 2nd hole with fellow Spaniard Pablo Larrazabal and Talor Gooch. Gooch earned his first PGA Tour win earlier this season at the RSM Classic.

Related: We walked the course with Phil Mickelson at the LIV Golf Invitational Series

Oosthuizen will begin his LIV Golf career on the par-5 18th hole alongside Na and Ian Poulter. Charl Schwartzel, Graeme McDowell and Wade Ormsby make up the headline act starting on the 3rd hole.

Take a look below at the full tee sheet and the official times in UK time. Every tee time is 2.15 pm.

Next Page: If Vladimir Putin had a tournament, would you play?": Poulter and Westwood respond