Bryson DeChambeau says his new commitment to LIV Golf will allow him to invest in the local communities of Dallas and California. 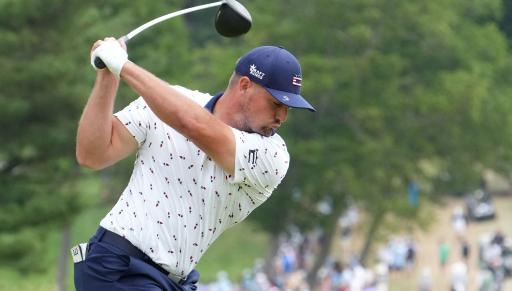 Bryson DeChambeau expressed a strong desire to give back to local communities with the money he will receive from his LIV Golf Invitational Series contract.

The former US Open champion sat with fellow rebels Matthew Wolff and Abraham Ancer in a press conference in Portland, where he reiterated he made a "business decision" to leave the PGA Tour.

DeChambeau was announced as one of the latest players to join the new series, commissioned by Greg Norman, during its inaugural event at Centurion Golf Club earlier this month.

He will captain Crushers this week at Pumpkin Ridge with the team draft set to take place tonight. DeChambeau also spoke of the LIV Golf Series as an opportunity to better rest after injuries.

"One of the things for me was a personal business decision. I run and operate my golf as a business as well as wanting to be one of the best players in the world," DeChambeau said.

"Secondly, this will give me more resources and opportunities to reinvest in my local community in Dallas and back in my original home in California, where I can do things for junior golf tours, improve my foundation and build a multi-sports complex.

"This will also give me more time to rest, the ability to have weeks off to recover my body in the way I want to so I can be prepared to give it my all when it comes to time.

"To not be depleted every week and continuing to get depleted over the course of time, so that was one of the things - the last part is I saw that first event in London and how much fun everyone was having. That was exciting to me and I want to be a part of something like that.

"From my perspective, we're golfers. We're providing entertainment globally and we'll continue to do so as time goes on," Bryson added when questioned on the backdrop of Saudi Arabia's human rights record.

According to reports, DeChambeau was offered a nine-figure contract to move from the PGA Tour and he admitted his decision was influenced by the supposed success of the first event in Hertfordshire.

The 28-year-old still believes he can build a legacy on the LIV Golf Series. He is an eight-time winner on the PGA Tour and like Ancer and Wolff, they are still hopeful of being able to play in major championships.

Ancer, 31 and a one-time winner on the tour, described moving to LIV Golf as a "very easy business decision" and like many of the rebels, he is hoping to spend more time with his family in an allegedly lighter schedule.

DeChambeau spoke of topics very close to his heart. He vowed to donate to the National Kidney Foundation, a voluntary charity based in New York which saved his father's life.

"Legacy can be created anywhere you provide your skillset. On the business decision side, I have made that because of how it was going to affect me personally and the community around me.

"It wasn't just selfish and saying 'I'm taking all this', it was about how can this do good for the people around me.

"Now that I have the opportunity presented in front of me, how can I do good with it in my community back in California where I grew up and at numerous other junior golf events and areas moving forwards?

"My dad is a diabetic and was going to die three or four years ago if he didn't get a kidney and the National Kidney Foundation came and helped him out.

"It would be doing them a disservice if I wasn't able to give back to them who helped my father stay alive."