A LIV Golf player reportedly will appeal his £100,000 fine and suspension from the DP World Tour. 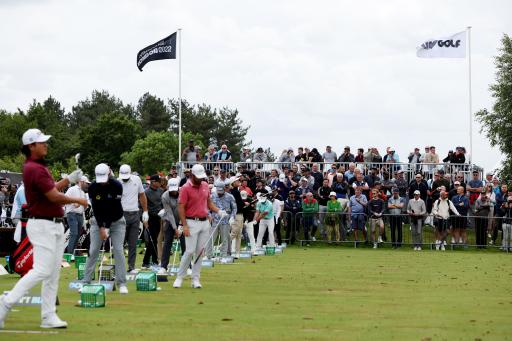 A LIV Golf player is appealing his £100,000 fine and suspension from the DP World Tour and plans to take his case “as far as necessary” after taking legal advice, according to a report by The Times.

The only player to publicly state they plan to appeal their suspension from the PGA Tour is Ian Poulter, who suggested at the inaugural event of the Saudi-backed series at Centurion Club that he thought he had done “nothing wrong”.

Whether Poulter is the player who plans to appeal his fine from the former European Tour circuit is not known.

Per the report, more LIV Golf players are set to resign from the DP World Tour in the coming weeks.

Last Friday, Pelley announced that members who played in the first event just outside of London were fined £100,000 and suspended from the three events that are co-sanctioned with the PGA Tour.

LIV Golf are reimbursing the players who have been fined, according to reports.

Those events include the Barracuda Championship, Barbasol Championship and the Genesis Scottish Open.

Pelley explained that many players on the former European Tour circuit feel slighted by the LIV Golf players.

“Every action anyone takes in life comes with a consequence and it is no different in professional sport, especially if a person chooses to break the rules,” he said.

“That is what has occurred here with several of our members.”

As many as 10 of the 17 players who were banned by the PGA Tour after their appearance at the UK opening event resigned their membership from the established American circuit.

Those players included the likes of former World No. 1 Dustin Johnson, Sergio Garcia and Graeme McDowell.

McDowell said he was resigning from the PGA Tour because he didn’t want the headache that would be caused by litigation. He also said he was “taking the moral high ground”.

The next LIV Golf event, which is being backed by $2billion by Saudi Arabia’s Public Investment Fund, will be held in Portland.

Big names Brooks Koepka and Bryson DeChambeau are set to make their debuts. They are joined by Abraham Ancer, Carlos Ortiz, Matthew Wolff and Pat Perez.

Next page: Patrick Reed splits with PXG ahead of LIV Golf debut