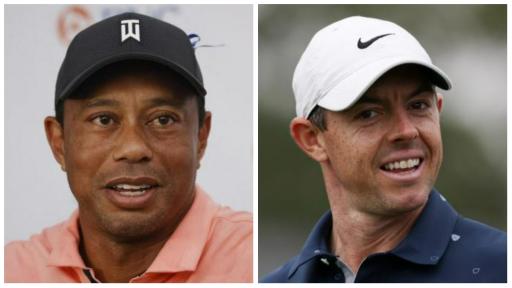 Woods was forced out of his own tournament earlier this week due to an injured foot, but he is still taking up his hosting duties this week. And a bit more.

These were also the same views of McIlroy two weeks ago at the DP World Tour Championship.

McIlroy, despite not competing in the Hero World Challenge this week, entered the emergency LIV Golf meeting via Zoom, as did PGA Tour boss Monahan.

It is understood there have been a number of PGA Tour player meetings about the breakaway Saudi-bankrolled circuit since its emergence in the summer.

The first emergency talks between Woods and the rest of his PGA Tour peers came back in August.

Only one of the 23 players that turned up to that particular meeting has since left for LIV Golf in Joaquin Niemann, who incidentally won Woods' Genesis Invitational earlier this year in February.

But on to the latest meeting held by Woods, and Hoggard understands that 23 people were once again in attendance, this time with Monahan on board too.

HOGGARD REVEALS MORE DETAILS BEHIND MEETING IN THE VIDEO BELOW:

"Yeah there was another meeting, we have had a lot of those lately it seems," Hoggard told Damon Hack on Golf Channel Today.

"I spoke with a source familiar with the meeting. It happened last night, it was here on property at Albany and it lasted about two hours I was told.

"All 20 players in the field here at the Hero World Challenge attended along with Tiger Woods, the host this week.

"Now Rory McIlroy, who has become the defacto spokesperson of the PGA Tour when it comes to all things LIV Golf, he joined the meeting via Zoom, as did PGA Tour commissioner Jay Monahan.

"I was told essentially it was just a continuation of the conversation that started a few months ago in Wilmington, Delaware, when Tiger and Rory got all the game's top players together and tried to come up with some sort of response to LIV Golf.

"Now I specifically asked Tiger Woods yesterday what his message is in these meetings and what is he telling players, and he really touches on some familiar bullet points here. He talked about playing opportunities for younger players, he talked about legacy, being able to play the major championships, and he also talked about the top players being rewarded more.

"Again, these are all things we've heard before, but it certainly hits differently when it comes from a 15-time major champion."

Woods, who was officially confirmed the winner for a second consecutive year of the PGA Tour PIP money, is still expecting to compete in The Match alongside McIlroy against Jordan Spieth and Justin Thomas on December 10.

He will then team up with his son Charlie Woods in the father-son PNC Championship from December 17 to 18.

Despite sadness as missing out on a first competitive start since The Open in July, the former World No.1 has shed light on the state of his golf game by declaring he was regularly shooting rounds of 64 and 65 on his local course prior to his latest injury.

Next Page: Adam Scott is CURIOUS about Tiger Woods and Rory McIlroy's dislike of Greg Norman