Adam Scott's curious comments about Tiger and Rory: "Is someone making that up?" 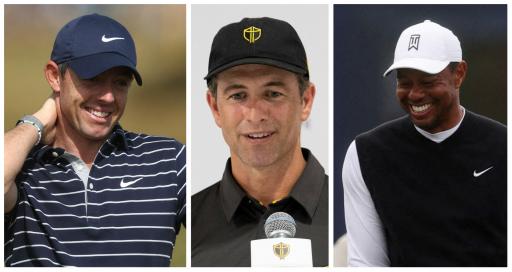 Adam Scott says Tiger Woods and Rory McIlroy are "speaking for the PGA Tour somewhat these days it seems" ahead of the Australian Open.

Scott has made no secret that he is interested in the LIV Golf League, which has just named three new venues ahead of the 2023 season.

The Australian - who has convinced Tiger's legendary Steve Williams to come out of retirement - doesn't view the league as pure evil.

That being said, the 42-year-old appears to be staying put for now. He wants to win more major championships and has even made the commitment to play more events in the U.S. next year.

Related: How much every LIV Golf player won in 2022

Woods - in this writer's opinion - has been more consistent in his approach and comments whilst McIlroy changes his tune more frequently than Bryson DeChambeau's approach to his diet.

Woods has called for Norman to quit as LIV Golf commissioner, echoing the sentiments expressed by McIlroy at the DP World Tour Championship where the Northern Irishman, 33, said The Great White Shark needed to "exit stage left".

Speaking before the Hero World Challenge on the PGA Tour - aside from ripping Phil Mickelson - Woods claimed that he didn't know what the end game would look like.

He has called for litigation to stop on both sides, providing Norman steps away.

On this subject, Scott told the media he believes the good of the game will eventually prevail. The 2013 Masters winner believes the PGA Tour and LIV should both just "get on with what they're doing".

"I guess they're speaking for the PGA Tour somewhat these day it seems. But I don't know what this coming together is. I don't know, is someone making that up? Like, is that a possibility? I don't know.
"I really am not involved at that level at all and it seems like all speculation to me. I genuinely feel like LIV should get on with what they're doing and the PGA Tour should get on with what they're doing and it will all sort out, whether that's together or not, I have no clue.
"But I don't necessarily think that it has to be together or not together for the good of the game. I think the good of the game will prevail, but it's a big shake-up and we're not used to that. And that's where I think it's at at the moment."

One high-profile player who doesn't believe Norman should step aside is Cameron Smith.

Smith - who was filmed giving it large after his latest victory - believes that despite Norman being "abrasive" at times, Norman, 67, is truly dedicated to their product.

The champion golfer of the year told the Sydney Herald and The Age:

"He believes in what he does. Maybe sometimes Greg comes off a little bit abrasive, but he's just trying to get a point across. He really does believe in this thing.
"I've spoken to him a million times the last four or five events. He believes in it and he thinks it's a good product. If you were [to attend] Miami, it's hard to see how it’s not going to work. Miami was such a turnout. It was unbelievable. The atmosphere was awesome.
"They've gone about things a little bit differently as far as golf is concerned, but they believe in the product and that's what you want."

Smith will be playing his first round at the Australian Open alongside Matt Jones and Adrian Meronk. Scott is paired with Cameron Davis and amateur Harrison Crowe.