"I know LIV Golf is talking to Cam Smith and others," says former Open champion

Ian Baker-Finch fires shots at LIV Golf format: "You’re not going to become a better player by going and playing 54-hole exhibition matches and getting paid $150,000 to finish last." 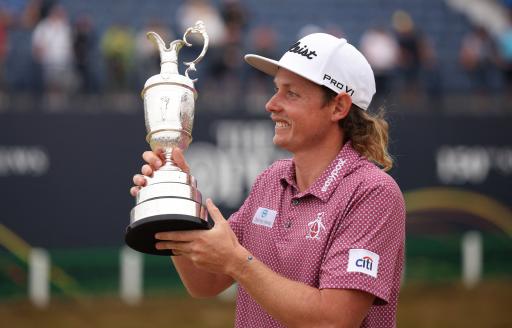 Former Open champion Ian Baker-Finch has revealed how LIV Golf are definitely in talks with new Open champion Cameron Smith and many other PGA Tour players.

Smith, 28, fired a stunning 8-under 64 in the final round at St Andrews to etch his name on the famous Claret Jug for the first time in his career, something fellow Australian Baker-Finch did at Royal Birkdale in 1991.

Smith is one of a number of star names on the PGA Tour being linked with a move to LIV Golf this month.

"I know that they are talking to him [Smith] and many others," Baker-Finch told Australia's SEN radio station.

"I hope he doesn’t because I think he can leave a great legacy by winning major championships and becoming the best player in the world.

Despite on-course commentator and former PGA Tour pro Colt Knost tweeting Smith was being offered in the region of $90 million, Baker-Finch believes that number has risen further in recent hours.

"Does he want to win more majors or does he want the money? I am hoping he stays and leaves a great legacy like a Tiger Woods or Rory McIlroy … which he could do.

"I think Justin Thomas and Rory McIlroy and a lot of those guys that still compete and play well in majors, and want to leave a legacy, they’re the guys I would be following."

Baker-Finch, who works on the PGA Tour as a CBS Sports announcer, does not rate the 54-hole exhibition format of LIV Golf, either.

So much so he believes Smith - who is now ranked second in the Official World Golf Rankings - would be somewhat wasting his golf career by leaving the PGA Tour where he has already amassed a whopping $8 million this season.

"I think the young guys are missing out," added Baker-Finch.

"The guys who go join LIV are going to miss out on the grind, what it takes to be a champion, to play in the great tournaments against the great players. It is hard work. You’re not going to become a better player by going and playing 54-hole exhibition matches and getting paid $150,000 to finish last.

"I understand the over-40s, the guys who can’t beat the young guys any more. I get it, I totally understand it. Go play, have a good time, make good money for your family. I understand it all. I just hate the way they are saying that the other tours haven’t done well by them or aren’t doing a good job.

"I just wish it wasn’t so combative, I wish it wasn’t ruining the ecosystem as we know it. Smithy has won $8 million [this year] already. I think that is pretty good. The guy that leads the tour over there this year will win $30 million. How can you complain about that? If you want to go play LIV, go play on that tour. Say goodbye. But don’t ruin the system or speak ill of the system that has made so many millionaires."

Next Page: Tiger Woods drops out of the TOP 1000 in the Official World Golf Rankings