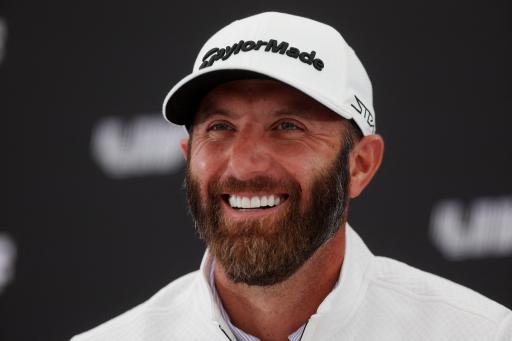 Dustin Johnson may be playing on an entirely different golf tour these days but that doesn’t mean he is likely to change his candour when it comes to press conferences.

Johnson, 37, who is reportedly being paid north of $100million to play in the LIV Golf Invitational series, scooped another $1.2million in Portland over the weekend.

When he faced the media and there was a rather confusing exchange when a reporter decided to ask him the question: “Dustin, why is my father’s love conditional?”

“You’re going to have to answer that one, bud. I can’t do that. I’m not real sure,” Johnson said.

Apparently, that question was from a comedian who was granted access to the LIV Golf media centre.

Anyway, Johnson was also asked about his motivation.

One of the accusations levelled at the LIV Golf players is that although they don’t seem too fussed about playing on the established tours anymore, they might just lose motivation and be a bit rusty when it comes to the majors.

“I’m just wondering what kind of question that is,” Johnson, the 2020 Masters champion answered.

“We still have world-class players out here, some of the best players in the world. You have to play your best if you want to win. I mean, just like today; got off to kind of a rough start, got it back, but obviously Branden played really well, but I did get it back to where I was within one with six or seven holes to go, and then he decided to go on a little tear there birdieing every hole coming in.”

He added: “You know, but it's still felt really good to get back in the mix, and obviously the juices were flowing. I was super excited about the position I was in.

“As far as motivation goes, I have more motivation than I've had in a while to perform.”

Johnson was also involved in a rather amusing exchange at his greenside interview at the conclusion of the second event.

Johnson turned away and appeared to try and stifle a laugh when Gooch compared the atmosphere of a LIV Golf event to a Ryder Cup.

Next page: Mickelson's score to par since returning to golf is incredible