Eddie Pepperell: "We may have just witnessed the most overpaid event in sport ever this week, relative to skill." 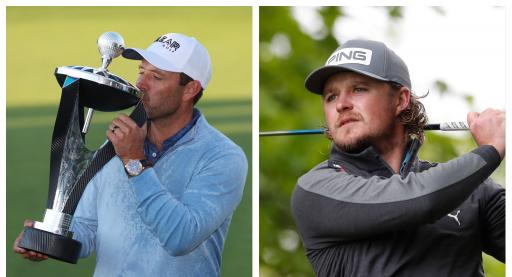 The opening LIV Golf Invitational tournament at Centurion Club would certainly appear to have divided opinion in the golf world, but one man who was not a fan of it all was DP World Tour pro Eddie Pepperell.

The Englishman took to Twitter over the weekend to vent his frustration at seeing South African Charl Schwartzel walk out of St Albans with a cheque for $4.75 million in the Saudi-funded tournament.

Schwartzel stumbled to a final-round 72, taking three-putts for bogey on the par-5 18th to hold one for a one-shot victory on 7-under par over compatriot and Stinger teammate Hennie du Plessis.

The 2011 Masters champion received $4 million for winning the individual tournament, and then an additional $750,000 as part of the four-man Stinger GC team that romped to a 14-shot victory.

That team was made up of South African quartet Schwartzel, du Plessis, Branden Grace and team captain Louis Oosthuizen.

The field split a prize pot of $25 million.

We may have just witnessed the most overpaid event in sport ever this week, relative to skill.

Pepperell was not just disgusted by that, but also the standard of the golf itself, as just eight of the 48 players broke par over 54 holes.

"We may have just witnessed the most overpaid event in sport ever this week, relative to skill," tweeted Pepperell after having sat through the final round of  the LIV Golf Invitational London at Centurion Club.

What did you make of the first LIV Golf event? Do you agree with Pepperell - was it the most overpaid sports event ever in relation to skill? Share your thoughts and comments over on the GolfMagic social media channels, or come and join us over on YouTube where we give our initial verdict on Greg Norman's new Tour.

Related: Here's how much they all took home at the LIV Golf Invitational London