Spectator at LIV Golf gives Oscar-worthy performance after being struck

This spectator at the inaugural LIV Golf series event dramatically hit the deck after being struck by a wild drive at Centurion Club. 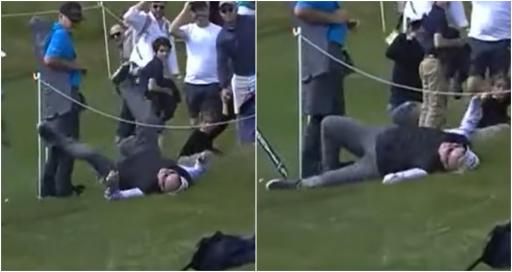 The emergence of the Saudi-funded LIV Golf Series and the fallout which included PGA Tour players being suspended indefinitely has made for an interesting time in the golf world of late.

There is no denying that the future of professional golf is hurtling towards an uncertain future. The LIV Golf updates are coming thick and fast.

Before we head to Portland, for the second $25million event at Pumpkin Ridge, it'd be no surprise if we see another dramatic twist in the saga.

You might be sick to the back teeth with it all. So at times it's nice to have a bit of light comedy relief.

Imagine, for a second, that there was no discussion about human rights abuses, sportswashing, virtue signalling and whataboutery and just take this moment for what it's worth.

This is absolutely hilarious. An Oscar-worthy performance from this protaganist. This spectator was hit by an errant drive from now-suspended PGA Tour journeyman Peter Uihlein.

The pro golfer does shout fore very loudly and points to the direction his ball is heading and then: thud.

SNIPER at the LIV tourney pic.twitter.com/JpPT4rCRce

In normal time, it looks incredibly painful and that the person may be seriously hurt. But no, they are having us on.

The spectator collapses in apparent anguish and for a few minutes we await an update to see if he is okay.

As Uihlien walks over, it becomes clear that all is well. The American signs some memorabilia for the "injured" spectator.

This all happened during the third round of the inaugral LIV Golf Invitational event at Centurion Club in St. Albans.

It was won by the South African former Masters champion Charles Scwartzel, who pocketed $4million for winning the exhibition tournament outright and another $750,000 for being in the winning team.

Next page: McIlroy delighted with congratulatory message from daughter Poppy