Eddie Pepperell with HILARIOUS tweet about the Saudi Golf League 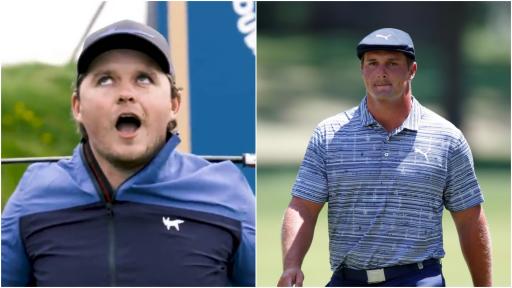 Bryson DeChambeau and Dustin Johnson committed their futures to the PGA Tour on Sunday evening and it now calls into question how the Saudi Golf League can possibly go on without any of the game's biggest stars.

While Greg Norman and Phil Mickelson will no doubt be most disappointed about their decisions, DP World Tour pro Eddie Pepperell was pretty annoyed, too, albeit tongue in cheek.

I was down to be a scoreboard carrier at their first event.

"Little gutted about the SGL rumours suggesting it’s falling apart," tweeted Pepperell, known for his wit when it comes to all the big talking points in the world of golf.

"I was down to be a scoreboard carrier at their first event."

Listen, if there’s an invasion, before you take my life, please take my golf clubs first.

Pepperell, 31, was taking aim at his own poor play on the DP World Tour of late having missed six of his last seven cuts on the circuit.

The Englishman has now slumped to a lowly 440th in the Official World Golf Rankings.

Pepperell has two wins to his name on the DP World Tour, both of which came in 2018 when landing the Qatar Masters followed by the British Masters.

MORE: DUSTIN JOHNSON ENDS ALL TALK THAT HE'S OFF TO A SAUDI GOLF LEAGUE