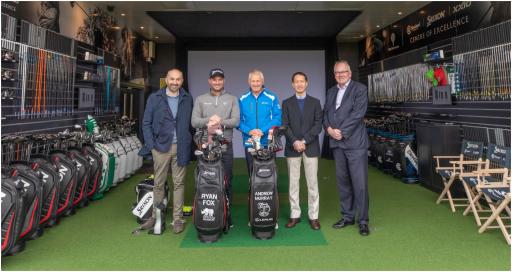 DP World Tour professional Ryan Fox has exclusively told GolfMagic he won’t be going to the LIV Golf series “anytime soon” but didn’t appear to rule out participating in the future.

Fox is in a rich vein of form on the former European Tour circuit this season and has already ticked off one of his big goals heading into the 2021/22 season: to win.

The 35-year-old joined the winners’ circle again with a stunning victory in February at the Ras Al Khaimah Classic three years after claiming his first European Tour title in Perth.

It was the biggest victory of his career when he overcame a nervous start in his final round to win by five strokes in Abu Dhabi after beginning Sunday with a six-shot lead at Al Hamra Golf Club.

Fox took home a top prize of €298,947.72 after emerging victorious over England’s Ross Fisher. He carded four rounds in the 60s for a thoroughly deserved win.

GolfMagic recently caught up with Fox, who has been a Srixon staffer 15 years, as he opened up the brand’s second Centre of Cxcellence in England at The Hertsmere, near Hertfordshire this week.

Fox spoke on a number of subjects that included how he got involved in the game in the first place, what that win has done for his career, future goals, how he hits it so far, major ambitions, not being a fan of bifurcating golf’s rules and starring in the DP World Tour’s social media content.

Stay tuned to GolfMagic for the second part of our Fox interview.

The Kiwi is in the field for the British Masters this week and is now at the start of a crucial four-week window where he can book his spot for The Open should he pick up enough ranking points.

One of the key topics, of course, is the heavily-debated LIV Golf Invitational Series which is due to start at Centurion Club next month with a $25million prize purse.

Slowly, more information is coming into the public domain about who might be taking part. Greg Norman, LIV Golf’s CEO, says 15 of the top 100 players in the world have asked to play.

Human rights campaigners argue the Saudi-backed series is an attempt by their government to sportswash. Others argue the PGA Tour and DP World Tour are more concerned about money than morals.

Such was the backlash of Phil Mickelson’s comments about overlooking the humans rights issues and strong-arming the PGA Tour against the Saudis it led to several players who had agreed to take part in giving cash back to LIV Golf, Norman has said.

The players seem to be stuck between a rock and a hard place. In a career that takes more than it gives, how exactly can you turn down the offer of staggering sums for simply playing golf?

On the PGA Tour, only Robert Garrigus, the world’s 1065-ranked player, has confirmed he has asked for a waiver. Everything else is smokes and mirrors, non-disclosure agreements and obfuscation.

Defending British Masters champion Richard Bland today admitted that he has applied to the DP World Tour for a release but wouldn’t go into further detail.

Lee Westwood has also joined Bland in requesting a release and said the ball was in the DP World Tour’s court.

When asked for his general thoughts about it all, Fox said: “It’s a hard one. I mean, I certainly won’t be going there anytime soon, but I can understand the appeal for people to go there. Obviously, it’s a decent whack of money.”

“I will say it’s going to be interesting how it plays out over the next couple of years. I’m imagining there is probably going to be some legal stuff go on. [It] could be a bit of a mess.

“But I will just be staying away for the time being.”

The global series, which is being spearheaded by Greg Norman as LIV Golf’s CEO, has a total prize purse of $255million. The format is 54 holes with no cuts.

Of the format, Fox said: “From a player’s point of view it’s kind of nice knowing that you’re going to get paid, but, yeah, I think you do lose a little bit of the aspect of golf.

“I can understand there’s tonne of individual stroke play events a year under the same format. I can understand trying something different with [a] team style structure or whatever they are gonna do.

“I think I saw a stat around the Olympics there’s sort of 600, 700… or maybe more individual stroke play events over all the tours during the year. There [are] not too many team events.

“There are not too many alternate formats and I don’t think you’d wanna do it every week, but, having something slightly different isn’t a bad thing in this game.

“There [are] definitely enough four-round stroke play events. I think the DP World Tour over the last few years have tried to make it a bit more interesting with knockouts and stuff like that.

“As I said, again, you wouldn’t wanna do it every week but it is kind of nice having something slightly different in there.”