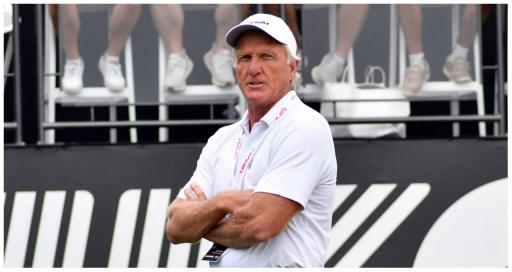 Greg Norman has slammed the "deafening hypocrisy" of those who criticise LIV Golf's involvement with Saudi government.

Norman, 67, has been relatively quiet ever since the conclusion of LIV Golf's "beta test" 2022 season which saw $255m in prize money handed out.

That money came from Saudi Arabia's sovereign wealth fund - PIF - which is bankrolling the breakaway tour.

LIV has faced a barrage of criticism owing to Saudi Arabia's poor human rights record, which Amnesty International has described as "abysmal".

They argue LIV is nothing more than sportswashing. Even Phil Mickelson admitted as much before he took himself away from public life.

That money was spent luring Cameron Smith, Dustin Johnson and Brooks Koepka away from the PGA Tour in multi-year, multimillion dollar contracts.

It is thought that in 2023 the LIV Golf League expenses will exceed $1bn.

LIV bosses hope the team element will ensure future profitability. Some players have been given equity stakes in their teams.

A New York Post op-ed peaked Norman's interest over the weekend which called for the civil war between LIV Golf and the PGA Tour to end.

It points out that among some of PIF's investments include stakes in Boeing, Meta and Electronic Arts.

And while the U.S. condemned the murder of journalist Jamal Khashoggi, it didn't prevent them selling missiles to Saudi Arabia in a $3bn deal.

Last week, it was also reported that PIF had snapped up WWE in a $6.5m.

Amen @nypost. The hypocrisy is deafening.

“Ever fly on a Boeing airplane? Buy tickets through Live Nation or play Electronic Arts computer games? Use Facebook? They’re all partially owned by the PIF and yet nobody bats an eyelid…”https://t.co/gdErNgi5lH

What is currently happening between LIV Golf and the PGA Tour?

LIV Golf are gearing up for their second season, which kicks off on February 24 at Mayakoba, Mexico.

They are yet to release a full schedule.

In recent months LIV have been hit by the losses of two top executives.

Atul Khosla, who served as the company's chief operating officer, resigned after reportedly almost coming to blows with the governor of Golf Saudi Yasir Al-Rumayyan.

Then in early January, they reportedly lost Matt Goodman, who served as LIV's president of franchises.

LIV Golf are suing the PGA Tour and are trying to find out if the American circuit funded the anti-Saudi protests that have been held at their invitationals.

The PGA Tour have countersued, alleging their mega-rich rival "induced" their members to breach their Tour agreements.

Things took a more sinister turn in the courts when attorneys for the PGA Tour accused LIV of compiling a chilling dossier on those protesting.

No new signees have been announced yet by the LIV Golf League, although Mito Pereira is expected to be joining soon.

LIV are still without a TV deal.