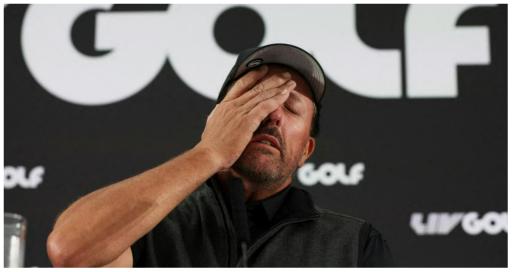 Phil Mickelson's latest social media activity suggests the LIV Golf player is still unhappy with the PGA Tour as he committed to the forthcoming Saudi International.

Lefty, 52, has confirmed he will be teeing it up in the Saudi International, which is now under the banner of the Asian Tour.

A host of LIV players will also be in attendance including the likes of Cameron Smith, Bryson DeChambeau, Brooks Koepka and Dustin Johnson.

Johnson, who reaped the rewards of LIV riches in its "beta test" eight-event first season, has won the Saudi International twice.

One social media user tagged Mickelson on Twitter and pointed out the field is "stacked". They also said the PGA Tour "no longer interests" them.

The Saudi International will present a chance for LIV players to achieve some valuable world ranking points before the 2023 major season.

Although officials at Augusta National have handed a boost to the 16 players already qualified for The Masters by confirming LIV players will not be banned.

Related: Who has qualified for the 2023 Masters?

Just this week Mike Whan, the chief executive of the USGA, also handed the LIV players a boost as he pointed out what he believed was "the real shame" after the emergence of the breakaway tour.

Mickelson plunges down the world rankings

Mickelson reached an unwelcome milestone last month. It went unnoticed for almost two weeks but he has now dropped outside the top 200 players in the Official World Golf Ranking for the first time in more than 30 (!) years.

The last time he was outside the top 200 was before he played the 1992 New England Classic on the PGA Tour.

Mickelson stepped away from golf and public life following the fallout from his inflammatory remarks about working with the Saudis.

Mickelson struggled in LIV Golf invitationals and found himself way down on the money list in 2022.