Henrik Stenson turns his back on the European Ryder Cup team to join the Saudi-funded LIV Golf Invitational Series. 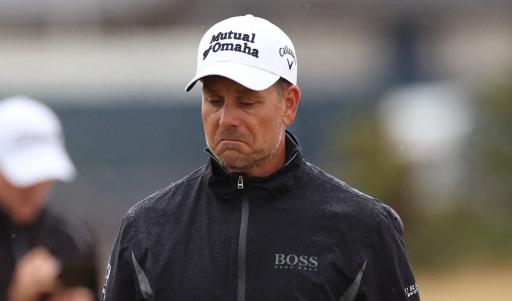 Henrik Stenson has been axed as captain of the 2023 European Ryder Cup side after incredibly turning his back on the DP World Tour and joining the Saudi-bankrolled LIV Golf Invitational Series.

Stenson, 46, was made European Ryder Cup captain in March this year for the biennial clash against United States in Rome next September.

At the time of his announcement, the 2016 Open champion revealed how it had been a dream of his to captain the European Ryder Cup side.

"When I started out as a professional golfer, it was beyond my wildest dreams that, one day, I would follow in the footsteps of legends of the game as Seve [Ballesteros] and be the European Ryder Cup captain," said Stenson, who had become the first Swede to ever captain the side.

How Seve must be turning in his grave...

Stenson had been linked with a move to a new Saudi-backed golf league at the start of the year, but he shut down those rumours by declaring his allegiance to the DP World Tour and accepting the 2023 European Ryder Cup captaincy.

Fast forward to July 20, and 11-time winner Stenson, who also won the season-long Race to Dubai in both 2013 and 2016, has now gone back on his word and broken away from the DP World Tour to join LIV Golf.

Henrik Stenson will be announced as joining LIV Golf within the next 24 hours, will play in their event at Trump Bedminster next week and - if anyone cares - will be a member of the ‘Majesticks’

According to Sky Sports News' Jamie Weir, Stenson's move to LIV Golf will be made official within the next 24 hours and he will become a member of the 'Majesticks' LIV Golf team ahead of their next tournament in Bedminster next week.

There is absolutely no chance LIV Golf want Henrik Stenson as “the player”. They want him as “the European Ryder Cup captain”. It’s a power move.

The DP World Tour, formerly the European Tour, reportedly met with Stenson on Sunday and again on Tuesday for showdown talks - and it was there where he was told he would be dropped as Ryder Cup captain for defecting to Saudis' LIV rebel series.

"Ryder Cup Europe today confirms that Henrik Stenson’s tenure as Captain of Team Europe for the 2023 Ryder Cup at Marco Simone Golf and Country Club in Rome, Italy from September 25 – October 1, 2023, has been brought to an end with immediate effect," reads a statement from Ryder Cup Europe.

"In light of decisions made by Henrik in relation to his personal circumstances, it has become clear that he will not be able to fulfil certain contractual obligations to Ryder Cup Europe that he had committed to prior to his announcement as Captain on Tuesday March 15, 2022, and it is therefore not possible for him to continue in the role of Captain.

"Confirmation of the new 2023 European Ryder Cup Captain will be made in due course. Ryder Cup Europe will be making no further comment on any aspect of the process until that time."

According to The Telegraph, Stenson is understood to have accepted in the region of £40 million to join Greg Norman's LIV Golf Invitational Series, which is funded by the Saudi Arabian Public Investment Fund.

Stenson played in the 150th Open Championship last week but he missed the cut by one shot on 1-over par.

Once ranked second in the world, Stenson now sits outside the top 170 - and that is only going to get worse given LIV Golf tournaments currently do not count for OWGR points.

Stenson has played in five European Ryder Cup teams down the years, winning three times, and he has a 10-7-2 record in his matches.