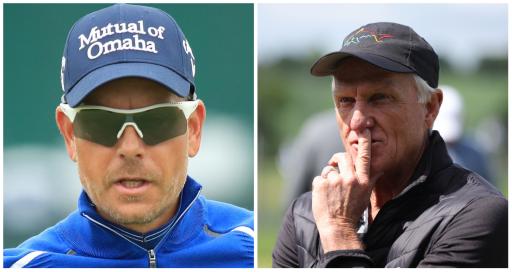 Henrik Stenson has penned a lengthy statement on his social media channels following his controversial decision to join the Saudi-funded LIV Golf Invitational Series, which has consequently seen him stripped of the 2023 European Ryder Cup captaincy.

Stenson, 46, is understood to have accepted a signing-on fee of $40 million to LIV Golf.

The 2016 Open champion has confirmed that he will make his LIV Golf debut at their next event in Bedminster from July 29 to 31.

Taking a closer look at Stenson's statement, which you can read below, he discusses his desire to remain a worldwide player competing on both the DP World Tour and PGA Tour despite having made the switch to LIV Golf.

Stenson also speaks about his disappointment at being sacked as European Ryder Cup captain having made "specific arrangements with LIV Golf" in order to "fulfil the obligations of the captaincy."

The Swede says he "disagrees" with Ryder Cup Europe's decision to axe him from the captain's role, but that "for now it's a decision" he accepts.

Stenson also says he hopes he can one day be part of the Ryder Cup Europe side "in any way I can."

After much consideration I have decided to join several of my fellow professionals and play in the LIV Invitational Series starting at Bedminster in a week or so's time. My interest in this concept has been well documented over the past few years and despite some of the unfortunate and ongoing tension between LIV Golf, the DP World Tour & PGA Tours, ultimately, the opportunity to play in LIV events moving forward is something that I want to experience. Like many of my fellow professionals, my hope is that my decision to play in LIV events will not restrict me from playing on any tour. Playing on multiple tours around the world is something I have done throughout my career, and I very much hope I can continue to do so. I have been fortunate to win some of the biggest championships, serve on various committees and compete on various teams throughout my career on different tours. I fully intend on supporting multiple tours in any way I can moving forward.

As many of you will have already seen, unfortunately my decision to play in LIV events has triggered Ryder Cup Europe to communicate that it is not possible for me to continue in my role as Ryder Cup captain. This is despite me making specific arrangements with LIV Golf, who have been supportive of my role as captain, to ensure I could fulfil the obligations of the captaincy. While I disagree with this decision, for now it is a decision that I accept. I have huge respect and admiration for the Ryder Cup and those individuals behind it who I know are doing their utmost to act in the best interests of the historic events. I want to thank everyone I have worked with to date to prepare for Rome in 2023, I am hugely disappointed to not be allowed to continue in my role but wish you all the best in your ongoing preparations.

It is a shame to witness the significant uncertainty surrounding the Ryder Cup, who will be eligible to play etc. I sincerely hope a resolution between the tours and its members is reached soon and that the Ryder Cup can act as a mechanism for repair amongst various golfing bodies and their members. It goes without saying that I remain on hand to support Ryder Cup Europe in any way I can and very much hope the opportunity to represent Team Europe in some capacity will come my way again at some point in the future.

In closing, clearly a part of my decision to play in LIV Golf events has been commercially driven but the format, schedule and caliber of player were also significant factors. I am committed to growing the game and using the game as a force for good. I am proud to have partnered with the R&A to deliver on my 'Paragolf series' for disabled golfers in Sweden, to have worked with my long time caddy and friend Fanny Sunesson to establish the Stenson Sunesson Junior Challenge and to have had the honour of co-hosting the innovative Scandinavian Mixed tournament on the DP World Tour alongside my friend and golf legend Annika Sorenstam. I am committed to the pursuit of sharing this wonderful game around the world and to continue to see the positive impact it can have on people's lives, I am confident that LIV Golf, just like the DP World Tour and PGA Tour, will be a force for good and am excited to be a part of it just like I am excited, and hopeful, to continue to be a part of the DP World Tour & PGA Tour.

Henrik, just be honest, it was a bucket load of cash and you couldn’t resist it, like the rest of the guys.

Will always love your game (especially those mid-irons!) but what a disappointing thing to do.

Eddie Pepperell was quick to blast Stenson's decision by tweeting: "Henrik, just be honest, it was a bucket load of cash and you couldn’t resist it, like the rest of the guys. Will always love your game (especially those mid-irons!) but what a disappointing thing to do."

PGA Tour star Max Homa had his say on matters, too:

Next Page: Padraig Harrington hugely disappointed that Henrik Stenson could not have waited another 15 months to join LIV Golf