How much is Greg Norman getting paid as chief executive of LIV Golf Investments? 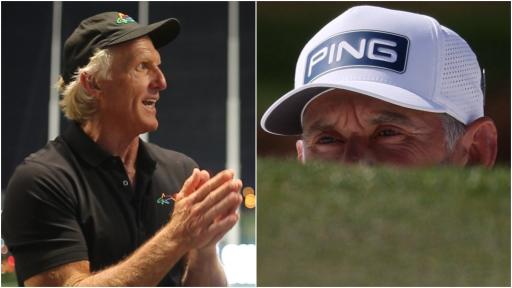 Greg Norman has told James Corrigan at The Telegraph that criticism of his new Saudi Golf League LIV Golf Invitational Series "stings" but that he is now willing to do everything he can in order to help grow the game of golf.

Norman, 67, was appointed chief executive of LIV Golf Investments earlier this season and his new eight-event LIV Golf Invitational Series will tee off at Centurion Club in England in early June.

In total, $255 million will be up for grabs across eight tournaments as the circuit goes around the globe.

But whatever you do, just do not call it the Saudi Golf League.

Related: LIV Golf Invitational Series picks up two former World No.1 golfers - but who exactly are they?!

Related: Everything you need to know about the LIV Golf Invitational Series so far

Norman first gave a World Golf Tour a go back in 1994, with eight events with $3 million purses for the top 30 players in the world. But it did not go anywhere as the PGA Tour quickly stepped in to stop the circuit in its tracks.

Fast forward to the present day, and Norman is trying again. Only this time around he is more determined than ever to mix it with the PGA Tour, despite all the criticism that has come his way as a result of the circuit being backed by Saudi millions.

"Look, I'll be honest with you, yes, the criticisms have stung a little bit," Norman told The Telegraph.

"But I am big believer that you can't run through a brick wall without getting bloody. I'm willing to run through this wall because I'm a big believer in growing the game of golf on a global basis."

The world's best golfers on the planet including Scottie Scheffler, Collin Morikawa, Jon Rahm and Rory McIlroy to name just four have all committed themselves to the PGA Tour. Even Tiger Woods has confirmed he will be sticking by the PGA Tour no matter what happens.

While the field for event one at Centurion Club has not yet been confirmed, Norman has revealed that two former World No.1 golfers and "Ryder Cup heroes" have signed up for it in St Albans, Hertfordshire.

In total, there will be a prize pool of $255 million up for grabs across the eight tournaments and Norman is hoping that the lure of such money at each event will draw more and more players to his circuit.

Corrigan also asked Norman about how much he was being paid as chief executive of the new LIV Golf Invitational Series.

"So $50 million a year?" Corrigan put forward to Norman, having reportedly heard that figure from sources.

"Who told you that?" replied Norman. "Am I being paid? Yes. Am I being paid a fortune? What's the definition of a fortune? Put this in perspective, I walked away as CEO of Greg Norman Company to take on this role. Big decision for me. To hand over the reins of a company I personally started from scratch, to where it is today.

"I didn't do it for my bank account. My account was just fine. I did it because I saw a lasting opportunity to break the monopoly that's been in power for 53 years. As a player, I railed against it."

Norman also told The Telegraph that he was not sent an invitation to attend The Masters by tournament officials at Augusta National like he normally would have been as a former major champion.

He did, however, get an entry ticket on the eve of golf's first major of the year, but the Australian refused to attend anyway.

"I normally get an invitation every January when they go out as a past major winner but not this time, although they did send me a grounds pass on the night before the first round."

Will the LIV Golf Invitational Series ever be a success without the best players in the world? Share your thoughts and comments over on the GolfMagic social media channels now, or come and join us over on our YouTube channel.