LIV Golf Invitational Series: What we know, what we don't know

This is what we know so far and the questions that still remain about the Saudi golf league. 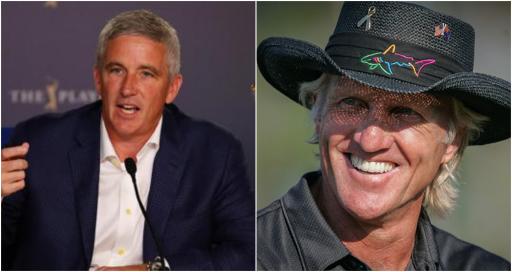 And so, the moment has finally arrived. After two years of operating in the darkness like Bane, the Saudi golf league is here.

Yesterday, Greg Norman announced that the LIV Golf Invitational Series will debut in London and will consist of eight events with a prize pool of $255million.

It has been a "threat" to the PGA Tour for the best part of two years. Along with the separate Premier Golf League, golf as we know it could soon be changed forever.

PGA Tour chief Jay Monahan said before The Players that he was "moving on" and took a swipe at Phil Mickelson by saying they were focusing on legacy, and not leverage.

Moving on Jay? Surely you jest. Norman's announcement about the series, which will kick off at London's Centurion Club a week before the U.S Open, boasts sums of money that will make your head spin.

How does the series work?

It will be a three-round, 54-hole competition with no cuts.

There will also be shotgun starts to fit events into a shorter time window and there will be a team component.

The 48 players will be divided into smaller teams.

There will be four events held in the United States (Pumpkin Ridge, Trump National, the International, and Rich Harvest Farms).

We do not know yet where the final event - the team championship - will be played.

The first seven events will have $25million purses.

The eighth and final event will offer $30million for the top three players of the season, with another $50million for teams in total prize funds.

What is the PGL?

The PGL is a separite entity to that of Norman's golf league.

They were originally backed by PIF (the sovereign wealth fund of Saudi Arabia) but they backed out and formed LIV Golf Investments.

LIV Golf Investments have also ploughed millions of dollars into the Asian Tour and are sponsoring 10 events.

That includes the Saudi International which several PGA Tour players participated in instead of playing at Pebble Beach.

The PGL is reportedly now backed by a different source of money from Europe. They previously attempted to form a partnership with the European Tour.

The European Tour said no and then formed a strategic alliance with the PGA Tour and rebranded to the DP World Tour and an increased prize their prize purses for the 2022 season.

The PGL is not going away and reportedly sent Rory McIlroy a letter outlining their proposals.

The PGA Tour also increased their prize purses and announced the Player Impact Program which Tiger Woods was the inaugral winner of.

That program has been seen by some as a "slush fund" to try and keep the biggest stars happy.

It had a $40million prize purse last season and it has been increased to $50million.

Why is LIV so controversial and what do we know about them?

LIV Golf Investments was funded in 2021 with Norman named as their CEO a month later.

They are funded by the vast sums of money from the Saudi Arabian government.

Critics suggest their involvement in sport is merely an attempt by them to improve their reputation in the world because of their terrible human rights record.

The Public Investment Fund, commonly referred to as PIF, also own Newcastle United in the Premier League.

Critics have suggested their "sportswashing" is not dissimilar to when Nazi Germany hosted the 1936 Olympics or when Russia hosted the World Cup.

What questions remain about Norman's league?

We do not know which players will participate.

Norman said after his announcement that several players - included players in the top 10 of the OWGR - have emailed him about their excitement.

We do not know if any broadcasters have agreed deals to show the tournament.

We also do not know if sponsors will get involved.

Some players who participated in the Saudi International were pictured without their regular sponsors on their clothing.

Perhaps there will be an announcement of a new streaming platform.

We also do not know how this will play out legally.

The PGA Tour have previously said they will ban any players who play in the league.

Jason Kokrak, who is sponsored by Golf Saudi, previously said that he was taking part in the league because he wanted to make as much money as possibly before he retires.

So in theory, he could announce he will play - the PGA Tour will ban him from future events - and then some law firms will get some huge pay days.

More: Cameron Smith has "no interest" in the Saudi league

Who will play in Norman's league?

There are several players that have been heavily associated with it, though in recent weeks and months some elite stars have committed to the PGA Tour.

They players who have pledged their allegiance are:

Though it has to be said that DeChambeau's statement about staying loyal despite weeks of speculation about his future was tepid.

He said "as of now" he will play on the PGA Tour, which suggests he could still yet jump ship.

Henrik Stenson, recently named as the European Ryder Cup captain, was reportedly offered the chance to play, too.

Though his new job ultimately means he will not be able to participate if it is to be believed that he was offered an ultimatum between leading Europe or playing in the Saudi league.

Which leaves a list of players who participated in the Saudi International that could potentially be joining up with this venture should they legally be allowed.

More: Is the SGL already over after DeChambeau and DJ distanced themselves?

At this point, we still need players to commit.

If there are no players then it goes without saying we have no league.

Presumably, a strong supporter of the venture (possibly Kokrak) will fully commit to the schedule.

The PGA Tour will then be forced to act and then we could have a legal battle that would set the precedent.