Ian Poulter on LIV Golf series: "There is so much more to it than the money"

Ian Poulter believes plenty of other PGA Tour players will "want to be a part of" the LIV Golf Invitational Series. 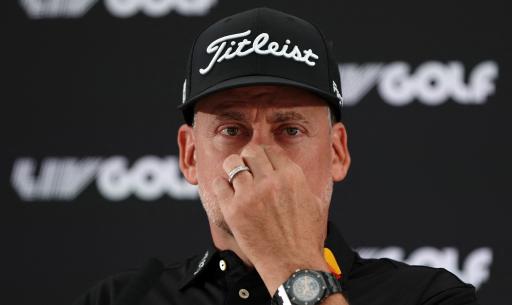 Ian Poulter believes there is so much more to competing on the Saudi-funded LIV Golf Invitational Series than just the money.

Poulter, 46, was speaking to the media ahead of the inaugural LIV Golf Invitational tournament at Centurion Club where 48 golfers are competing for a mammonth $25 million prize fund.

In total over the eight-event series, players will play for a combined $255 million.

"I regard myself as a global golfer," said Poulter, when asked if he considered himself as a rebel or a trailblazer for joining LIV Golf.

"All of those options to play golf for as long as I can, to provide as good as content as I possibly can for myself on the golf course is exactly what I'm doing.

WATCH: Ian Poulter gives a deathly stare when asked if he would play in a golf tournament hosted by Vladimir Putin

"The legacy standpoint is that I'm trying to provide for my family, which is the first and foremost thing I want to do. I come to work to play and that is my job at the end of the day.

"I love it, love playing golf, love the opportunity that LIV gives us from a standpoint of playing, slightly less golf which gives me the ability to be fresher and ready to go. It's a massive opportunity that I am really looking forward to."

He added: "I think there is so much more to it than the money. I'm getting older, want to play as much competitive golf as possible, but just like the transition I made on the PGA Tour in 2004 when I decided to play nearly 18 events with a significant increase in money to what I was playing on on the European Tour is the same premise."

Poulter, who has not resigned from the PGA Tour, was then quizzed on whether other stars such as Rory McIlroy will eventually decide to join LIV Golf?

"I definitely see other top players watching on this week and wanting to be a part of it," said Poulter.

"Huge investment coming into the game of golf and sport in general, of which definitely players will be looking in with interest.

"I think they will want to see what it's all about.

"The team format has always been something that most people have always gravitated to and had their best time on the golf course.

"It is a vast sum of money, but it's a great platform to be able to build the game of golf and give back at the same time."

Known as 'The Postman' for always delivering on the Ryder Cup stage, Poulter was then asked about his fears about being ineligible for future biennial contests against the United States.

Is that an issue for Poulter?

"We don't know yet," he replied. "I'm as interested as you are to see how it plays out, I'd like to think it wouldn't.

"All the golf I've played in all the different countries and different Tours that I've played on, I don't see why this should be any different."

But is it a risk?

"Of course but it's an unknown risk," he continued. "We don't know how DP World Tour are going to view it. It's obviously a factor."

Before closing out the press conference, Poulter was then asked on a moral basis as to whether he would ever play in a tournament if Vladimir Putin was ever hosting it.

"That is speculation, I'm not even going to comment on speculation," said a disgruntled Poulter.

Lee Westwood, Laurie Canter and Sam Horsfield will make up Poulter's team, which is called Majesticks.