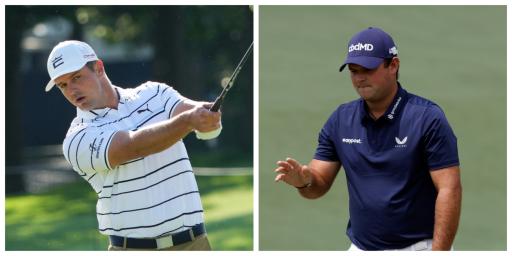 Bryson DeChambeau and Patrick Reed are set to shockingly join the LIV Golf Invitational Series and turn their back on the PGA Tour.

As reported by James Corrigan of the Daily Telegraph, DeChambeau and Reed are set to agree big-money deals to join the breakaway series commissioned by Greg Norman.

CONFIRMED: Bryson DeChambeau will play in the second LIV Golf event in Portland

The American pair will now risk being banned from the PGA Tour and if it transpires that they have resigned, they will be ineligible to play for America at the Ryder Cup.

DeChambeau has only played six times this season as he has wrestled with a wrist injury which kept him out of the US PGA Championship.

"For me, I personally don't think that at this point in time I'm in a place in my career where I can risk things like that (LIV Golf)," DeChambeau said at the Memorial Tournament last week.

Related: Ian Poulter on LIV Golf Series: "There is so much more to it than money"

"I'm loyal to my family that I've created around me with sponsors and everything. And as of right now, the golf world is probably going to change in some capacity. I don't know what that is. Not my job to do so.

Much like Dustin Johnson who pledged his allegiance to the tour earlier this year, DeChambeau looks to have made a full U-turn in his decision to leave the tour.

Earlier this afternoon, DeChambeau's manager Brett Falkoff released a statement to all-but confirm his man will be joining LIV Golf.

"Bryson has always been an innovator," said Falkoff. "Having the opportunity to get in on the ground floor of something unique has always been intriguing to him. Professional golf as we know it is changing and it’s happening quickly."

As for Reed, he is one of the most controversial figures on the PGA Tour. The former Masters champion could tee it up in Portland on June 30 which is the host of the second LIV Golf event.

Phil Mickelson announced his participation on Monday and five-time tour winner Rickie Fowler is also expected to make the move.

Next Page: Phil Mickelson tees up with Yasir Al-Rumayyan in LIV Golf pro-am