"If Vladimir Putin had a tournament, would you play?" Poulter & Westwood respond

Ian Poulter and Lee Westwood refuse to answer questions on whether there is anywhere in the world they would not play golf. 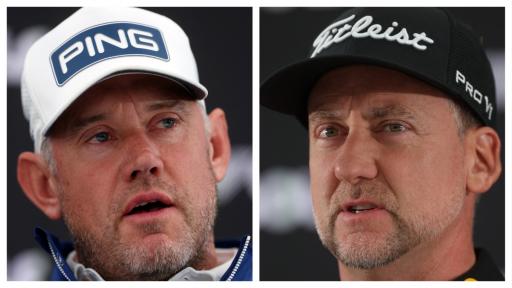 Ian Poulter and Lee Westwood were asked by a reporter whether they would consider playing in a golf tournament if it was hosted by Russian president Vladimir Putin following their decision to play in the controversial Saudi-funded LIV Golf Invitational Series.

Poulter and Westwood were speaking ahead of the inaugural LIV Golf event at Centurion Club in St Albans earlier today, where they were joined by their Majesticks team members and fellow Englishmen Sam Horsfield and Laurie Canter.

As you can see from the video below, Poulter and Westwood were left speechless at the reporter's question on morality.

"If Vladimir Putin had a tournament, would you play that?"

Ian Poulter and Lee Westwood refuse to answer questions on whether there is anywhere in the world they wouldn't play. pic.twitter.com/v9WkEYvDoy

"Lee and Ian, is there anywhere in the world you wouldn't play?" said the journalist. "If Vladimir Putin had a tournament would you play that?"

First there was a brief pause before Poulter said: "Speculation, I'm not even going to comment on speculation."

There was more silence, a sip of water from Poulter followed by a deathly stare.

"I don't need to answer that question," said Poulter.

"I don't need to answer that question," answered Poulter.

"Lee, do you want to answer it?" said the reporter. "I mean, would you have played in apartheid South Africa, for example?"

Westwood replied: "You're just asking us to answer a hypothetical question there, which I'm not going to answer."

The reporter said: "Well they're moral questions aren't they?"

Westwood concluded: "We can't answer a question on that."

Related: Ian Poulter says he joined LIV Golf because "there is so much more to it than money"