Colin Montgomerie has offered his opinion on the enduring situation surrounding Phil Mickelson's future in the game. 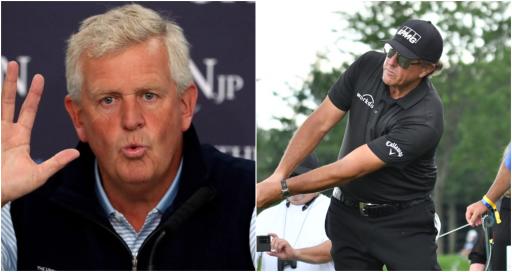 Colin Montgomerie is never shy of an opinion. And it appears he wants Phil Mickelson to come back to the PGA Tour.

Related: Pro drops "f--- you" message to the golf world on day of Saudi field announcement

Mickelson has only been spotted in public once since he exiled himself from the golf community in February.

That sighting saw Mickelson looking like he had added a bit of weight and reportedly was sporting a beard.

Golf's most extravagant showman had become the game's yeti, it seemed. Even his own mother said she struggled to recognise him at first.

That video of Mickelson hitting bombs at his local club violated membership policy and it was swiftly taken down from the Internet.

Now we are at a crossroads in Mickelson's career. At the time of writing, we are reportedly hours away from a big announcement.

That announcement was the full field for the first Saudi-backed LIV Invitational Series event at Centurion Club next month.

Lefty has previously declared his intentions to play in it. Via his agent Steve Loy, it was confirmed he had asked the PGA Tour for a waiver.

He had also declared his intention to play both the US PGA and the U.S. Open. Lefty declined to defend his championship at Southern Hills.

So who knows what will happen from here. Monty, like Sir Nick Faldo, has urged golf's oldest male winner of a major to return to where it all started.

Faldo said before the US PGA: "Phil has to return to the PGA Tour.

"He began with an unbelievable achievement, winning on tour at the age of 20 while still an amateur.

"Then he became the oldest winner of a major in history at the PGA last year — along with Tiger Woods's 15th major win, the greatest achievement I believe our game has ever seen.

"It's incredible to think those two things from Phil are 30 years apart. But, if he joins another tour, he's going to look at his trophy cabinet one day and think, 'What's it all about?'"

Monty echoed those sentiments. "Let's hope he comes back to the PGA Tour," he told Bunkered.

More: Even Phil Mickelson's mother did not recognise him

Next page: What is going on with Jason Kokrak's Saudi sponsorship?