Richard Bland decided to post an interesting picture on social media ahead of the field announcement for the LIV Golf Invitational Series. 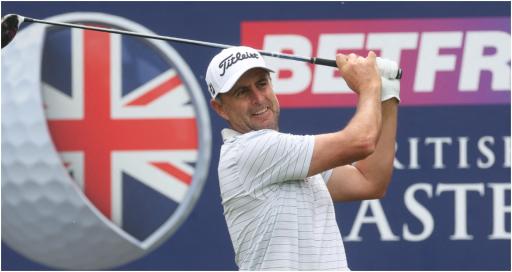 England's Richard Bland made clear his feelings about golf on the day of the field announcement into the first event of the Saudi-backed LIV Golf Invitational Series.

Bland, 49, became one of the first players to confirm that he was going to play in the first event at Centurion Club next month and run the risk of getting banned by the DP World Tour.

The main tours drew a line in the sand when they refused their members releases into the first $25million tournament across the global, eight-event series which has a total prize purse of $255million.

"Most of my career is behind me now as regards playing at the very highest level. I'm 50 years old in six months.

"I'm a realist. Mother nature does tend to catch up on you. I have an opportunity to play these events and secure my future and I'd be pretty foolish to turn that down."

He added: "I haven't been granted the release; I pretty much knew that a couple of weeks ago [speaking before the British Masters].

"Everybody has their own opinion and are they going to play or not going to play; you can only do what's best for yourself.

"I understand some people might not like that but it's an opportunity for me to make the next stage of my life very comfortable and how can I turn that down?"

Later today, it is expected the field will finally be confirmed.

Lee Westwood, Ian Poulter, Sergio Garcia, Martin Kaymer and Louis Oosthuizen are expected to be in the field.

Westwood, like Bland, confirmed his long-assumed interest at the British Masters at The Belfry.

Garcia opted for a different route. He did not speak publicly about his desires to play but an incorrect ruling on the PGA Tour led to an angry outburst by Garcia earlier this season.

Garcia told the rules official that he wouldn't have to deal with him in the future, hinting at his Saudi-backed future.