"Snip snap" What is going on with Jason Kokrak's Saudi sponsorship?

Jason Kokrak has been switching between wearing and not wearing Golf Saudi branding. Is he in or out?! 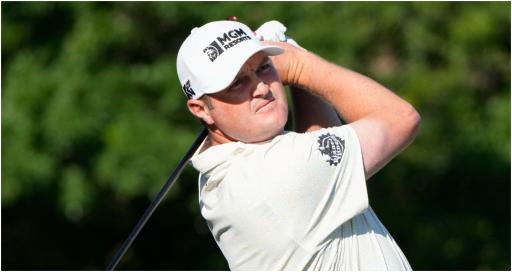 When you go back to the beginning of the Saudi-backed league murmerings, Jason Kokrak stood out.

There was so much smoke and mirrors. Whispers behind the scenes. Talk of non-disclosure agreements.

We're not too sure what the chatter was behind the scenes with the players was truly like.

Rory McIlroy seemed to be sick to the back teeth of it all the way through.

Dustin Johnson, who has always been careful with his words in press conferences, wouldn't really elaborate on what his future golf plans were.

"Is that as far as we're gonna go?" a reporter previously asked DJ about it all. The former World No.1 just smiled and said: "Yep".

Even Bryson DeChambeau didn't really want to answer questions about how close he was to signing on the Saudi-dotted line.

And then we have Kokrak. Essentially, the 37-year-old admitted that he wanted to make as much cash as he possibly could before he retired.

Cash is king, Kokrak said way back in early February.

This is what he said at the time:

"I've had long conversations with a couple of the elite players on the PGA Tour. I haven't signed any $20million contracts or any elevated contracts that would make me want to stay. I want to make as much money as I can in as little time.

"There's been no official contract that's come my way. I've heard rumours of guys signing already, guys in extended talks with the Saudis. I'm an independent contractor and I’m trying to take advantage.

"Competition is good. The Saudi Golf League or the Premier Golf League or whatever you want to call it has gained traction and created competition for the PGA Tour, which has in-turn increased the purses."

-Had “Golf Saudi” on the bag
-Didn’t have it on his bag for Augusta
-Has it back on his bag now
-Yet (allegedly) will *not* be playing the first LIV event in London (per a source in the field this week) pic.twitter.com/xFo4SfUn2p

Kokrak was later pictured with Golf Saudi logos on his clothing and bag.

It was removed for the Masters and Kokrak refused to talk about his future at Augusta National.

It's back on his clothing again this week at the Charles Schwab Challenge at Colonial Country Club.

Yet the folks over at No Laying Up believe that he is one player who is not actually playing in the first event of the LIV Golf Invitational Series at Centurion next month.

More: Greg Norman on being rejected by LPGA Tour and LET

Next page: Trump says PGA Tour has been taking advantage of players