During the second press conference on Tuesday at the LIV Golf Invitational Series at Centurion, a golf reporter was stopped from asking a question. 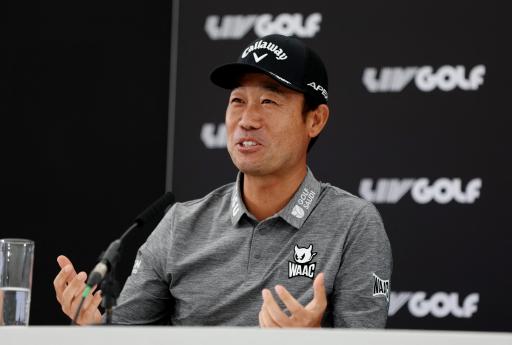 A reporter was shut down and stopped while asking a question at the end of the second press conference on Tuesday at the LIV Golf Invitational Series near London.

The reporter wanted to ask a question towards the end of the session, which began at 1 pm and was cut short by five minutes, however, he was refused by the host.

Kevin Na, Talor Gooch, James Piot and Sihwan Kim walked off the stage and the reporter insisted on asking his question by going to the front of the press conference room.

He was shut down again, wasn't allowed to ask another question and was even led by out by security.

It seems AP reporter @RobHarris was led out by security after this happened. (Not a joke.) https://t.co/TZByUUv7nX

The same reporter asked a very significant question in the first press conference at 11 am in relation to the human rights record of Saudi Arabia.

The initial question in the morning press conference mentioned issues related to migrant groups, LGBTQ individuals and the 81 men who were executed in March and bombings in Yemen.

Dustin Johnson, Graeme McDowell, Louis Oosthuizen and Ratchanon Chantananuwat were visibly taken aback and McDowell was the only player to attempt a response.

"I wish I had the ability to be able to have that conversation with you. You know, I think as golfers, if we tried to cure geopolitical situations in every country in the world that we play golf in, we wouldn't play a lot of golf," McDowell responded.

The atrocities linked to Saudi Arabia and the ethical considerations of the players, the series and its relationship with the Public Investment Fund were key talking points in both press conferences at Centurion.