LIV Golf players could be banned from major championships in 2023

A ban from all four major championships is reportedly a sanction that each organisation will consider in 2023 as the LIV Golf Invitational Series continues to grow in strength. 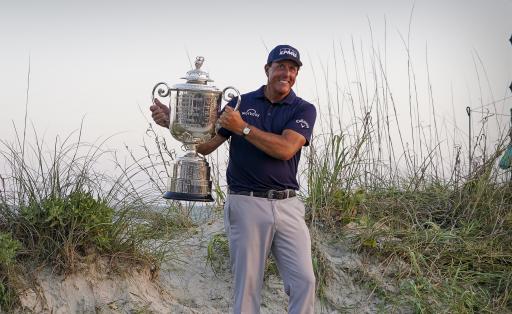 Players who have chosen the LIV Golf Invitational Series over their traditional tours could be banned from all four major championships next season.

According to Riath Al-Sammarrai and Derek Lawrenson of the Daily Mail, the organisations that oversee each major event will act in unison and will consider bans for the LIV Golf defectors.

The R&A has been particularly strict with its approach to the figures from the Saudi-backed series this week such as Greg Norman who wasn't invited to the Champions Dinner.

Phil Mickelson was also not made to feel welcome. He won The Open in 2013 and he has allegedly been paid £200 million by the Public Investment Fund of Saudi Arabia to play in the controversial new series.

Earlier this week at The 150th Open Championship, R&A chief executive Martin Slumbers said banning players isn't on their agenda, but they will "review exemptions and qualifications criteria for The Open," for future championships.

Related: LIV Golf make a complete hash of their tweet about a player (not) at The Open

Slumbers, who was as vocal as he's ever been since the emergence of the LIV Golf Series, said the two events at Centurion and Pumpkin Ridge haven't represented "the best long-term interests of the sport."

In his press conference earlier this week at St Andrews, Tiger Woods also questioned the choices of young players who have shown that money is their incentive and not glory.

"To play there (LIV Golf), I disagree with it. I think that what they've done is they've turned their back on what has allowed them to get to this position," said Woods.

"Some players have never got a chance to even experience it. They've gone right from the amateur ranks right into that organisation and never really got a chance to play out here and what it feels like to play a tour schedule or to play in some big events."

So far, the PGA Tour has suspended its members and the DP World Tour issued fines and suspensions from playing in three co-sanctioned events, the third and final one being this weekend at the Barracuda Championship.

If players were to be banned from playing in the majors, it would certainly affect those sitting on the fence, thinking of which side they will come down on.

Allegedly, there is a waiting list of players looking to defect to the LIV Golf Series as the many millions and billions of Saudi pounds continue to attract recognisable faces.

Next Page: Phil Mickelson on what the R&A told him, and having respect for Tiger Woods...