Phil Mickelson on what the R&A told him, and having respect for Tiger Woods 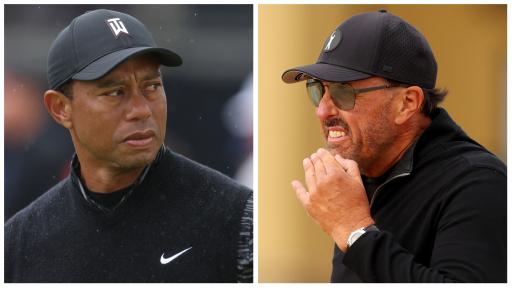 Phil Mickelson was warned by the R&A that it would "not be a great idea" if he turned up to their past champions events at the 150th Open Championship at St Andrews this week.

"The R&A contacted me a couple weeks before and said, look, we don't think it's a great idea you go, but if you want to, you can," said Mickelson after carding an opening level-par 72 at St Andrews.

"I just didn't want to make a big deal about it, so I said fine. We both kind of agreed that it would be best if I didn't."

Mickelson rocked the sport at the start of the year following his comments made to biographer Alan Shipnuck about the Saudi Arabian regime (backing a new super golf league) and using its money as leverage against the PGA Tour.

Lefty took a break from the game as a result of his comments but then returned to accept a huge LIV Golf contract rumoured to be in the region of $200 million.

Mickelson, like all the other Saudi golf rebels, has now been suspended by the PGA Tour for his involvement with LIV Golf.

Despite his no-show at the start of the week, Mickelson admits it has certainly not taken the gloss off this special week at the 150th Open Championship.

"I love being here," confirmed Mickelson.

"Everybody here loves golf, and we find this place to be very spiritual. As great as this game has been to me, to be able to come here to the home and compete again -- I think this is my sixth one here.

"I've had some great moments here. I don't know if you guys remember the Dunhill Cup, but I ended up being a part of the winning Dunhill Cup in '96 with Steve Stricker and Mark O'Meara. And we had all these rounds and different weather conditions. It was really special to play here in all the different conditions.

"I just see the greatness in the course when you get different winds because you see bunkers you don't even know are there. Just the greatness of it kind of shines. I love playing and competing here. It's just a special place."

Mickelson was also pressed on what he made of Tiger Woods' comments about LIV Golf players having turned their backs on the PGA Tour.

"I certainly respect his opinion," Mickelson said of Woods.

"I have a lot of respect for him. I respect his opinion. I think everybody's going to have strong emotions and opinions about it, and I certainly respect his."

Next Page: Tiger Woods goes in hard on LIV Golf players competing at The Open