Former Masters champion Charl Schwartzel leads by three shots with 18 holes left as the Stingers take a commanding lead in the LIV Golf team championship too. 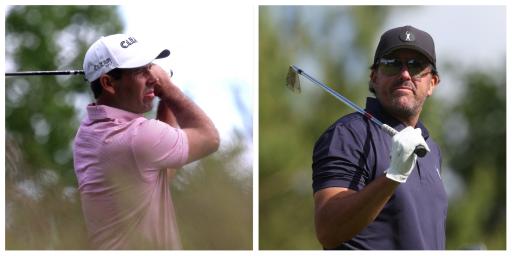 Schwartzel, 37, hasn't won on the PGA Tour in six years but his round of 66 on Friday propelled him to 9-under for the week in St. Albans.

The South African is part of the Stingers team, captained by Louis Oosthuizen, which has a commanding seven-shot lead at the top of the team leaderboard.

He leads by three shots from his teammate and countryman Hennie Du Plessis. There are only eight out of 48 players under par after 36 holes and you have to go down to 1-under to find Dustin Johnson in tied fifth.

Johnson played with Phil Mickelson, as he did on Thursday, and Sam Horsfield in the second round and the two-time major champion made two birdies and an eagle on his way to a 70.

The 37-year-old revealed after his round that he intends to just play a mixture of LIV Golf events and the final two majors of the season, intending to play less golf now that he has resigned from the PGA Tour.

"I feel like this week, obviously once I decided to come to play here, I felt like especially over the last 12 months or so, trying to figure out if I was going to stick to playing on the PGA Tour," Johnson said after the second round.

"If I was going to join LIV, so it was always in my mind and then obviously once I decided to do this, my focus is just on golf and playing as good as I can and so yeah, this week has been great."

Despite shooting 1-under on his first competitive appearance since February, Mickelson faltered on Friday and carded a 75 with only two birdies.

Lefty finished on 4-over-par for the week and he is 13 shots off the pace. He is in tied 26th place alongside Kevin Na and Martin Kaymer with one round left.

He and Johnson attracted another large crowd in Hertfordshire and they were greeted on their first tee box by LIV Golf Invitational Series commissioner Greg Norman. Norman walked with Johnson as they played the 3rd hole (his first hole) of the shotgun start.