LIV Golf R3 tee times: When and where does Phil Mickelson tee off on Saturday?

Phil Mickelson will tee off in the final round at Centurion Golf Club with JC Ritchie and James Piot as the first LIV Golf event comes to an end. 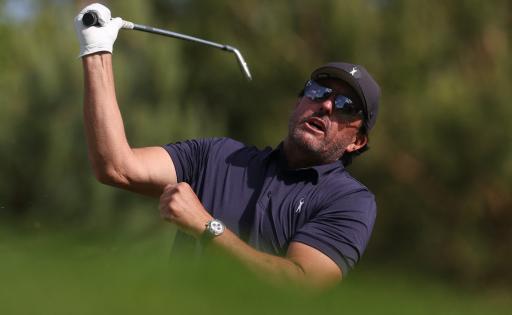 Six-time major champion Phil Mickelson will tee off on the 5th hole in the third and final round of the LIV Golf Invitational Series event at Centurion Golf Club.

Mickelson shot a disappointing score of 5-over-par in the second round on Friday. He is currently 13 shots behind the leader Charl Schwartzel who is on 9-under-par after 36 holes.

Lefty will play with JC Ritchie, who are both on 4-over for the week in tied 26th place, and James Piot who is one shot better off on 3-over-par.

As for the leader and former Masters champion, Charl Schwartzel will tee off at a different time on hole 1. Him, Hennie Du Plessis and Peter Uihlein will play at 2.26 pm.

They are known as group 1b. Group 1a is made up of Oliver Bekker, Scott Vincent and Phachara Khongwatmai and they will tee off at 2.15 pm on hole 1.

Related: LIV Golf player Branden Grace on PGA Tour bans: "I don't care what they do"

The rest of the 48-man field will go at 2.15 pm as well. If Schwartzel was to win the inaugural LIV Golf Invitational event, he would pick up $4 million.

Next Page: Pat Perez confirmed in next LIV Golf Invitational event by wife on Instagram