Rory McIlroy says "we probably can't wait too much longer" to sort out the issues between the PGA Tour and the LIV Golf Invitational Series. 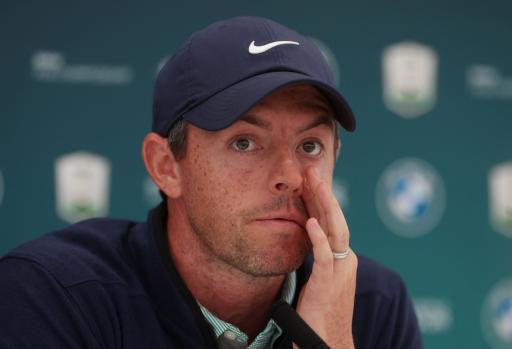 Rory McIlroy says "we probably can't wait too much longer" to sort out the issues with the PGA Tour and the LIV Golf Invitational Series because the game is "ripping itself apart" as he appeared to welcome the idea of peace talks.

Speaking ahead of the Dunhill Links Championship on the DP World Tour - where a posse of LIV players will tee it up at St Andrews - McIlroy conceded that he had absolutely no issue with LIV Golf Tour players receiving world ranking points.

Nor is he in favour of banning them from majors.

But McIlroy said he wants the best players in the world to be ranked accordingly. The Northern Irishman, 33, said that he believes the LIV Golf Tour are "making up its own rules".

According to McIlroy, "the ball is in their court" and he would welcome a discussion if they were willing to play nicely in the sandbox.

"Every week that passes without the inclusion of LIV athletes undermines the historical value of OWGR," the letter stated, which was signed by the likes of Bryson DeChambeau, Dustin Johnson, Phil Mickelson, Cameron Smith, Brooks Koepka and Ian Poulter among others.

Granting LIV Golf OWGR accreditation would give their players a pathway to qualify for golf's four major championships unless they are exempt as a former winner.

Johnson, in particular, is now ranked 23rd in the OWGR. He was in the top-10 when he signed for LIV Golf in June. He has resigned his PGA Tour membership.

Patrick Reed - who was forced out of the Dunhill Links Championship - has had his own issues with OWGR.

Justin Thomas, a staunch defender of the PGA Tour like McIlroy, reacted strongly to the letter sent to Dawson.

McIlroy, who has spearheaded the dramatic changes announced by the PGA Tour alongside Tiger Woods in response to LIV, reflected on this topic on Wednesday before the media.

"If Dustin Johnson is somehow 100th in the world it's not an accurate reflection of where he is in the game," McIlroy told reporters.

"But at the same time, you can't make up your own rules. There's criteria there, everyone knows what they are and if they want to pivot to meet the criteria they can.

"I've not problem with them [LIV players] getting ranking points at all but you have to meet the criteria. If you don't it's harder to justify why you should have them."

McIlroy continued: "I've always said there's a time and place where everyone involved needs to sit down and work together.

"It's very hard to do that right now with court cases going on.

"There's a natural timeline to let things settle down a little bit. People can go into those meetings with a cooler head."

"Right now, with where everything is, it's probably not the right time but we probably can't leave it too much longer. I'm all for getting round the table and sorting things out."

McIlroy also spoke exclusively to BBC Sport, where he conceded that he too, at times, has said things that have been "a little bit inflammatory".

"I would just say the ball is in their court," McIlroy told the publication.

"If they [LIV players] want to come to the table and try to play nicely within the sandbox that's already created, the opportunity is there."

He continued: "Right now with two lawsuits going on, and how heightened the rhetoric has been, I think we just need to let it cool off a little bit,

"I've probably said a few things that are maybe too inflammatory at times, but it just comes from the heart and how much I hate what this is doing to the game.

"It has been an ugly year [but] there's a solution to everything.

"If we can send rockets to the moon and bring them back again and have them land on their own I'm sure we can figure out how to make professional golf cohesive again."