LIV Golf player signings have dried up of late, but things could very quickly change in 2023. 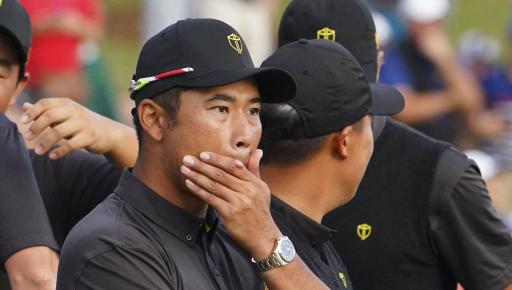 This time we have received information from a LIV Golf insider as to the real reason why interested PGA Tour players are currently waiting on joining the Saudi-backed circuit until 2023.

LIV Golf did not announce any new signings at its last Chicago tournament won by Cameron Smith, and it would seem unlikely that any additions will be made ahead of its sixth event in Bangkok in two weeks' time.

Although we have heard a very strong rumour that a Presidents Cup player is about to be snapped up by LIV Golf CEO Greg Norman.

Aside from some huge changes made by the PGA Tour heading into the new season, with four key innovations that go a long way to rewarding its best players, there is one big reason why the golf transfer window has been a little quiet of late.

It is down to the ongoing issues surrounding LIV Golf and the Official World Golf Ranking (OWGR) system.

More: Here's the reason why no South Korean players have joined LIV Golf yet

"A number of interested players on the PGA Tour, and a couple of big names in particular, are wanting to wait until 2023 to join LIV Golf if they are to move at all," an insider has told GolfMagic.

"This is because they will have accumulated enough OWGR points that if LIV Golf still doesn't have it sorted then they will still have enough points to stay in the Top 50 for the 2022/23 season and be able to qualify for the 2024 majors.

"The players and their agents are all doing the maths at the moment, and by going to LIV Golf in 2023, they can still play in all four majors in 2023 and 2024 regardless of what LIV manages to sort out with the OWGR."

More: Patrick Cantlay is not moving out a shock move to LIV Golf

Back in June, Norman told Australian Golf Digest that "the rumours are true" and that agents of a number of World Top 40 players have been continually expressing interest to join the LIV Golf Tour.

But as it stands, LIV Golf tournaments continue to be shut out from receiving all-important ranking points.

This is because they are 54-hole and 48-man events.

To further rub salt into the wounds for LIV Golf, a total of 23 tours around the world are currently recognised by OWGR.

It is also understood they could be waiting until 2024 for a decision to be reached as well, according to the Washington Post.

Only LIV Golf CEO Norman is not interested in waiting that long.

He wants answers and a response right now.

According to SI's Bob Harig, LIV Golf believe they are being "slow played" by the process and have become agitated and impatient.

Norman's letter to LIV Golf players was recently leaked in the media.

Growing frustrations about losing out on OWGR points are not just felt by Norman.

Some 50 LIV Golf players sent a letter last week to the chairman of the OWGR pleading their case for accreditation.

Currently, and rather worryingly, players on the controversial upstart do not have a pathway to qualify for golf's four major championships and the Olympics.

"Every week that passes without the inclusion of LIV athletes undermines the historical value of OWGR," the letter stated.

The letter signed off: "We call on you to render a positive decision quickly – for the benefit of the integrity of the rankings, the game and all of us who love the sport."

PGA Tour star Justin Thomas believes LIV Golf players only have themselves to blame for their current situation.

A number of LIV Golf players have been competing on the DP World Tour and on the Asian Tour where they are still permitted to play, as opposed to on the PGA Tour where all members remain banned.

He also explained he has no interest in sitting down with Norman to work out any cooperation where the two Tours are concerned, something that has been echoed by Norman himself.

There are a total of 11 LIV Golf players in the field at this week's Alfred Dunhill Links Championship at St Andrews on the DP World Tour, where Rory McIlroy starts a warm tournament favourite as he looks for redemption at the Home of Golf following his near miss at the 150th Open.

Should LIV Golf tournaments receive OWGR points? Which players currently on the PGA Tour do you expect to move to LIV Golf soon? Share your thoughts and comments over on the GolfMagic social media channels.

Next Page: After a slap in the face, Patrick Reed's week got a lot worse in France