They also made a 'Quiet Please' sign for the LIV Golf event but they were not allowed to bring them into Trump National Bedminster. 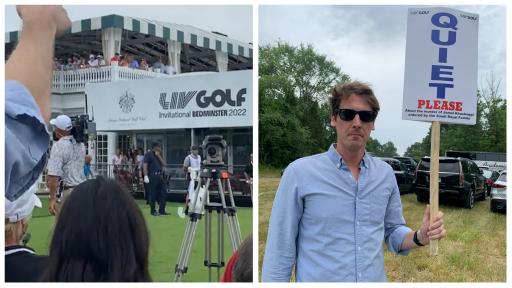 Their 'Quiet Please' signs were also denied at the entrance gate because of the words written on them.

The Good Liars comedy act, made up of Jason Selvig and Davram, posted a video to their Twitter feed of them putting off Mickelson on the tee box ahead of his opening round on Friday.

"Do it for the Saudi Royal Family", shouted Selvig just as Mickelson was about to send an iron down the fairway.

Selvig is then seen apologising to the golf fans around him after they did not take kindly to his choice of words.

A security guard then warned him if he shouted out one more time that he would be escorted from the premises.

WATCH WHAT HAPPENED BELOW:

A heartfelt apology NOT accepted. Sorry this happened to you @jasonselvig pic.twitter.com/Iv0rNX6qRb

Mickelson ended up having another week to forget on LIV Golf as he finished 6-over par for the tournament. He did, however, take home $146,000 for finishing solo 35th.

Henrik Stenson, who was sacked as European Ryder Cup captain last week, won the tournament on his LIV Golf debut. The Swede left Bedminster with a cheque for $4.375 million for winning the tournament, and also finishing second in the team event.

Stenson fired a sly dig at the European Ryder Cup team in his victory speech.

Related: How much they all won at LIV Golf Bedminster

The Good Liars also posted their custom 'Quiet Please' signs for the tournament held at Trump National Bedminster GC, but they were not allowed to bring them in to the grounds due to the words that were written on them.

The signs featured the words: 'Quiet Please... about the murder of Jamal Khashoggi ordered by the Saudi Royal Family.'

DO NOT say the quiet part loud at a Saudi Golf event hosted by Trump. https://t.co/gOaOgmOwDL

Next Page: "If Tiger Woods and Rory McIlroy wanted to take LIV Golf down, they could" admits DP World Tour pro