RBC has ENDED its deals with Dustin Johnson and Graeme McDowell 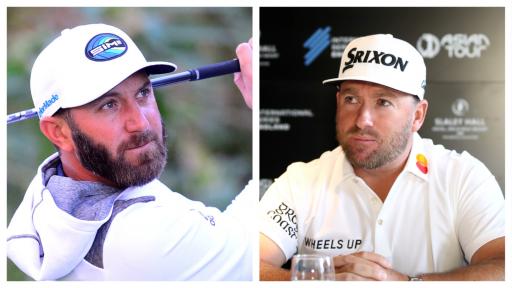 Dustin Johnson and Graeme McDowell have both lost their sponsorship deals with RBC following their decisions to compete in the first LIV Golf Invitational Series tournament at Centurion Club in England from June 9 to 11.

Johnson and McDowell were two of 42 confirmed players in the first three-round event set for St Albans next week. Six more spots will be filled in the event over the coming days.

While McDowell's participation in the first LIV Golf event was no surprise, the one of Johnson most certainly was especially after the former World No.1 confirmed he was fully supporting the PGA Tour earlier this year.

The other aspect to all this is that the RBC Canadian Open on the PGA Tour is also being staged in the same week as the first LIV Golf event next week.

RBC (Royal Bank of Canada) issued an instant statement upon learning the news of Johnson's commitment to LIV Golf.

A statement from the RBC Canadian Open on Dustin Johnson’s decision to play in LIV golf event pic.twitter.com/BSahB3UeaX

"Together with our partners at RBC, we are disappointed to learn at this late stage that Dustin Johnson has made the decision to play the LIV Golf event," read an RBC statement.

"Our focus continues to be on hosting the widely celebrated return of the RBC Canadian Open and welcoming the world's best players to Canada."

Related: Everything you need to know about the LIV Golf Invitational Series

Several hours later, RBC confirmed to ESPN that they would be dropping both Johnson and McDowell as ambassadors of the brand.

"As a result of the decisions made by professional golfers Dustin Johnson and Graeme McDowell to play the LIV Golf Invitational Series opener, RBC is terminating its sponsorship agreement with both players," wrote an RBC ambassador.

"We wish them well in their future endeavours."

Johnson has reportedly been offered in the region of $150 million to compete in the LIV Golf Invitational Series, and that is before a shot has even been struck in the eight-event series with a $255 total prize fund on the line.

Next Page: Graeme McDowell on PGA Tour bans - "It is not good for the game..."